On the Main, BAVARIA YACHTS has its own test centre. What exactly happens there? We went there to take a look ... 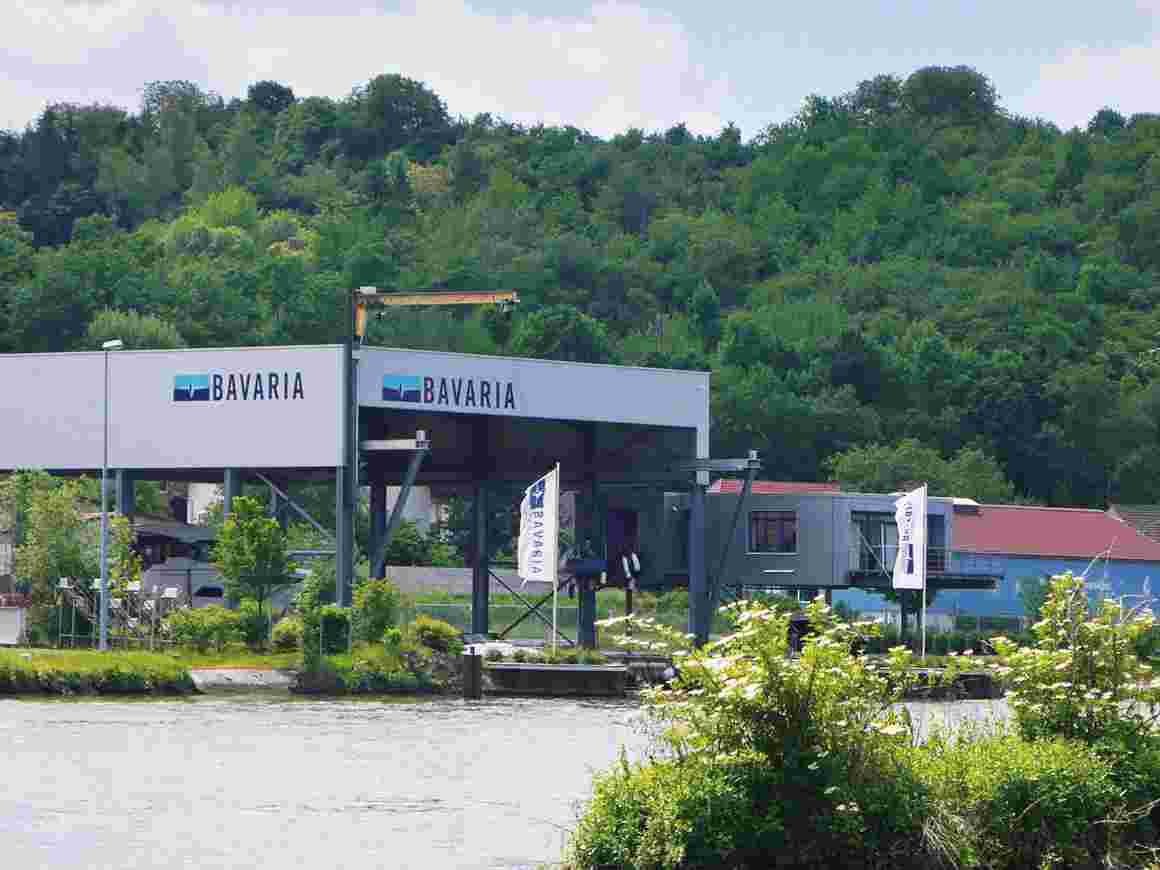 The River Main flows by right in front of the large balcony, a cock crows on the other shore, the view continues into the vineyards across the river, inland waterway vessels chug past.

That is how idyllic it is here, where, with this outpost, the BAVARIA Yachtwerft is still by the water. The BAVARIA YACHTS test centre is about 18 kilometres from the factory itself where the yachts are built. And when he speaks of his work here, Frank Seuffert, manager for certifications and tests at BAVARIA YACHTS, comes into his stride. Especially when it comes to boating on this section of the Main, between the kilometre posts 276 and 284, or, in other words, between the locks at Marktbreit and Kitzingen. Especially the winter has had its effect on him, because then he and his colleagues quasi have the River Main for themselves: "Near the locks I have already seen a fawn on the bank, how it observed us on the water. The mother stood by very attentively a little further inland. The young deer though looked at us as so curiously as if it was about to swim out to us!" In the summer, on the other hand, there is a lot happening on the river and then one has to be very careful, you have to watch out for sunbathers, swimmers and people paddling in boats. "The children, however, are happy about the waves that land on the shore when we pass," smiles Seuffert. Indeed, it is necessary, and on this part of the river also allowed to drive a boat from time to time with full throttle, especially for the propeller adjustments. But more about that later.

The work of Frank Seuffert and his team colleague Joshua Meffle is not just boating, on the contrary.

In addition to carrying out the practical tests, they are also responsible for the certification of all BAVARIA yachts, and what this in the first place means, is a lot of paperwork and time in the office. "We are more or less the interface between the project managers for the individual models at the factory on the one hand and the inspectors of the Germanischer Lloyd on the other," explains Seuffert. "We moderate, so to speak, the process of CE certification and other requirements. We create the technical documentation, schedule appointments and much more – the GL inspector comes to the shipyard three or four times for a type approval."

In addition, the two take care of the manuals and specifications for each yacht.

The manuals must not only be created, but also kept up-to-date – if something is changed in the production of a yacht, this must also be taken into account in the manual. And the specifications for individual boats are often needed by dealers beforehand. The two also answer technical questions from dealers or customers: "Sometimes we feel like the extended arm of customer service," Seuffert laughs cheerfully.

But what happens in the test center?

After all, Seuffert and Meffle spend 30 to 40 percent of their working time here by the Main and mostly on the river itself. All prototypes of new models are checked here: motors, functioning, trim, systems, everything is tested completely. In the case of sailing yachts, the masts are placed, a heeling test is done. They also check whether all the shrouds and bottle screws fit perfectly and if everything on the rig is correct. In the case of motor boats, the propeller adjustment is important: Which propellers drive the boats as fast as possible and with what consumption? This is quite different depending on the engine, the weight and the load, so it is all about finding the best propeller for every model and engine. This is not so dramatic with the sailing yachts, even with a displacement yacht like the BAVARIA E40. It is a completely different issue with planing yachts. There the propeller has to be absolutely perfect so that they plane at the correct speed and do not cease planing unexpectedly. This is not a simple task, since such boats are rather weight-sensitive and a propeller has to be chosen which is optimal as an all-rounder in both empty as well as fully loaded yachts.

A challenging job – what do you have to know to pull it off?

Frank Seuffert says, „Above all a lot of practical experience with boats,“ says Frank Seuffert, „and a technical background.“ He has been with BAVARIA YACHTS since 2000, is a shop mechanic, carrosserie builder, an Industrial Master in metalwork, and he also has all the usual boat driving licenses. At BAVARIA YACHTS he first worked in production, then as technical consultant in customer service and now for four years as head of the test centre and certification department. His colleague Joshua Meffle is a mechatronics engineer and grew up with boats on Lake Constance. „Practical engine experience and technical knowledge are important for the tests, but also for practical operation,“ he says: „When a warning lamp lights up or the engine cuts out, we can usually fix it ourselves!"

In addition to the test drives on the Main, tests are also conducted out on the open sea, which is then mostly on location with the larger distributors, for example on the Baltic Sea, in the Adriatic Sea or in the South of England. "With the large BAVARIA C57 it would have been a bit of a tight fit here in the test centre," says Seuffert, "with that one we spent a whole week testing her in Portoroz, Slovenia."

Boats from the current running production series can be checked in a pool directly in the shipyard before going on the often long journey to the dealer and customers.

The location on the shores of the Main is not only popular for testing.

"We like to organize events for our dealers or customers," says Seuffert, mischievously adding: "And even some of the company's own private parties!"