In the Corona summer of 2020, Martin Daldrup sailed his BAVARIA 34 Holiday alone from Martinique to Helgoland. An extraordinary journey under extraordinary circumstances… 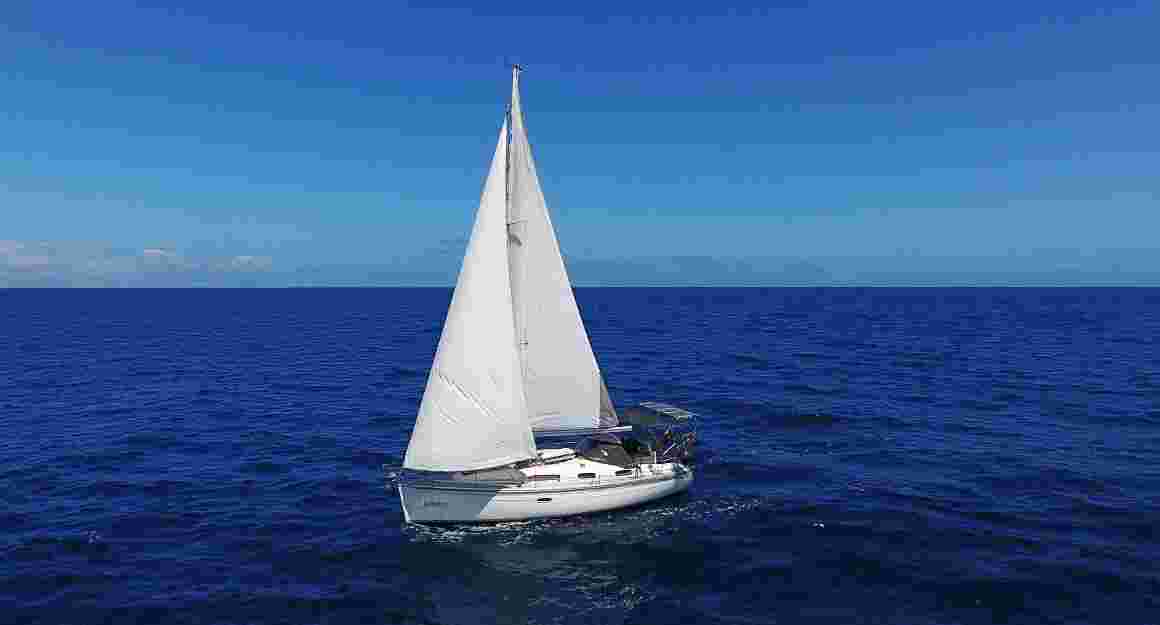 The BAVARIA 34 Holiday from 2008 crossed the Atlantic several times.

What a trip. 5,130 nautical miles, from Martinique around Scotland to Helgoland. It took Martin Daldrup 42 days, sailing alone – a voyage that was not actually planned, but had to be sailed this way due to the circumstances caused by the Corona pandemic. The boat: a BAVARIA 34 Holiday built in 2008. And her skipper and owner obviously enjoyed the long voyage: „At 11:30 a.m. today I tied up the lines in the southern harbour of Helgoland and successfully completed my longest solo trip so far. This has been a sailing treat over long stretches, always a navigational challenge and sometimes a little tough in the high latitudes of the Atlantic.“

When Martin bought his BAVARIA 34, Jambo, in 2013, he had no blue water ambitions: „The choice fell on her because she had many features that we valued at the time: Furling mainsail for the beginner, a diesel heater that is essential in the Netherlands, an integrated autopilot that acts directly on the rudder quadrant, and a hot and cold water circuit.“It was only later that the boat became increasingly equipped, the longer the trips made became. „An AIS transponder was added after our first trip through the English Channel. After that, there were many things like a dinghy, outboard motor, new batteries, EPIRB, spinnaker pole to pole out the foresails, a life raft, voltage converter (12 V to 220 V) and so on. These are all items of equipment that we needed years ago for the longer trips, such as to northern Spain. 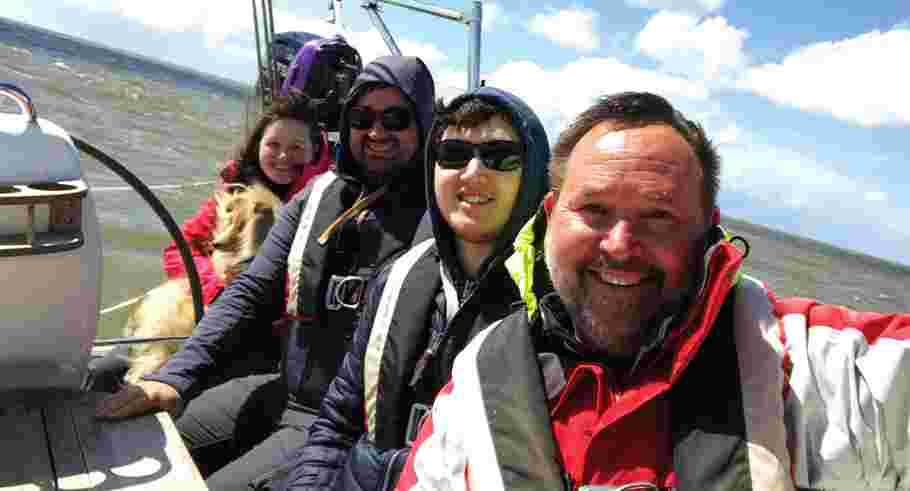 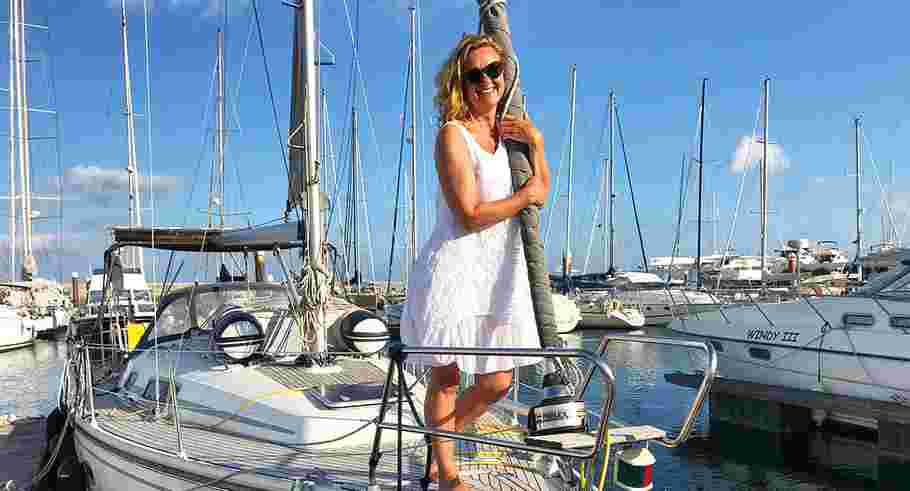 ... but also enjoys spending time with family and friends.

In spring 2019, the Jambo underwent a major refit to get her ready for the Canary Islands and beyond. I replaced the old navigation system with a modern one, built an equipment rack and a bimini. In addition, the Jambo has been fitted with solar panels (480 Wp) so that the energy supply on long journeys is more self‐sufficient and at least partially independent of diesel and petrol. Otherwise, electricity is also produced under way with the engine, or a small petrol generator.“

In any case, the boat and her equipment proved their worth on these two Atlantic crossings. On the long return trip, there was a bit of wind around Bermuda, but otherwise the Atlantic crossing turned into more of a slalom between high‐pressure slack zones. Since Martin had no intention of motoring through extended lulls for days on end, he had to keep heading north and almost found himself in Newfoundland before he could finally set the longed‐for easterly course: „In the cold Labrador Current and in dense fog, shivering with cold, I change sail position and can finally set sail on an easterly course to face the high pressure that is meanwhile moving northwards in the east. After so many days, far off course and almost in Newfoundland, this is the turning point and probably the most profound moment of the whole trip for me,“ he writes in his very entertaining blog. 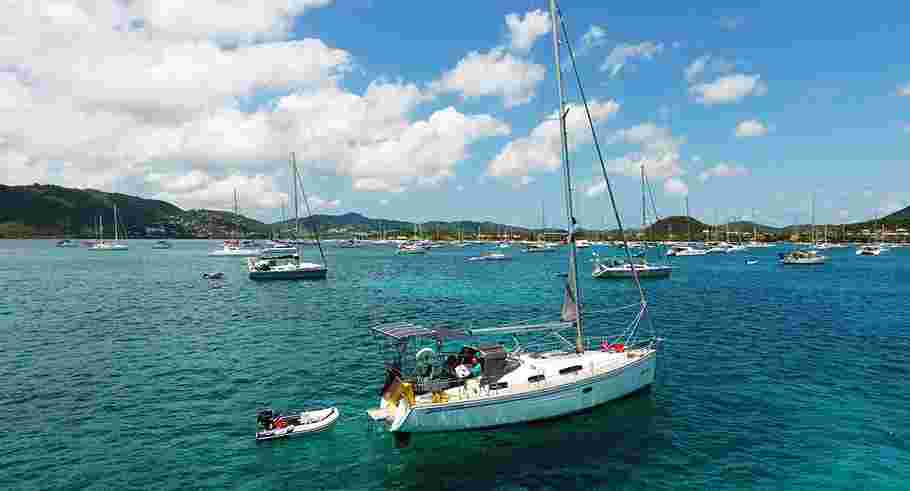 The Jambo anchoring in the Caribbean. 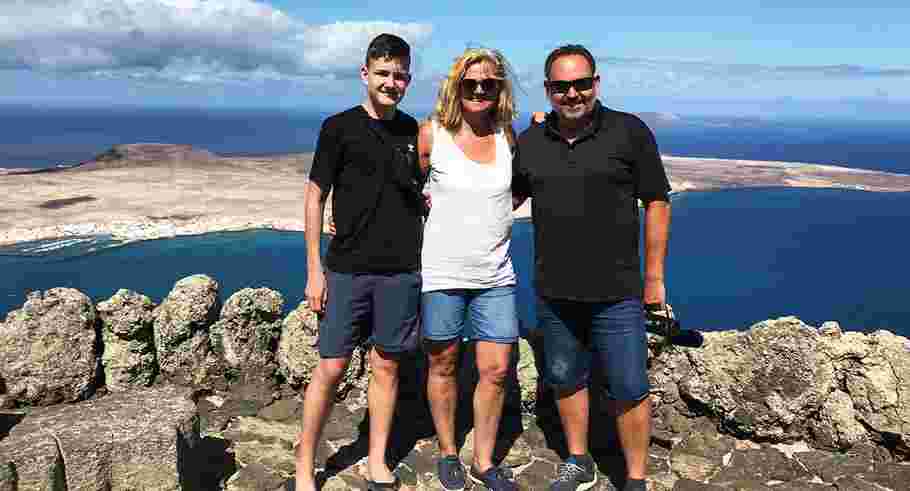 Then, at some point, the next decision is made. „I had planned this trip as a non‐stop journey. Anke and I had originally wanted to meet in the Azores, but even before the start of the trip it looked unlikely that this would work out due to the Corona crisis. So I set a course for Great Britain right from the start. In the middle of the northern North Atlantic after a few days on a north‐easterly course, following the wind fields and avoiding the doldrums, I’m at a crossroads and have to decide whether to sail north or south past the UK.“

There are good reasons for the northern option: „For me as a single‐handed sailor on a nonstop voyage, the English Channel with its traffic, narrowness and currents is only second choice. On the northern route to Scotland there is more sea room and of course much less traffic, which allows for an easier sleeping rhythm. But of course in June it’s cold in the high latitudes of the North Atlantic and especially so for the sailor who just a few weeks ago was enjoying the warm climate of the Caribbean.“ In fact, Martin not only crossed the Atlantic from west to east on this trip, but also passed 44 degrees of latitude at the same time: a diagonal Atlantic crossing, so to speak.

What a feeling of happiness for him to dock in Helgoland after 42 days alone at sea. Of course, Martin doesn’t always sail alone. „I prefer sailing with Anke or with my sailing buddies, especially when it comes to the short weekend trips where you can take a look at new bays, towns or islands on shore excursions. The long ocean passages, on the other hand, I prefer to do alone, as I have to carry a lot of provisions and fuel for them, whereby one of the two cabins is used entirely as storage space. The space on the Jambo is then no longer sufficient to take several crew members along.“ 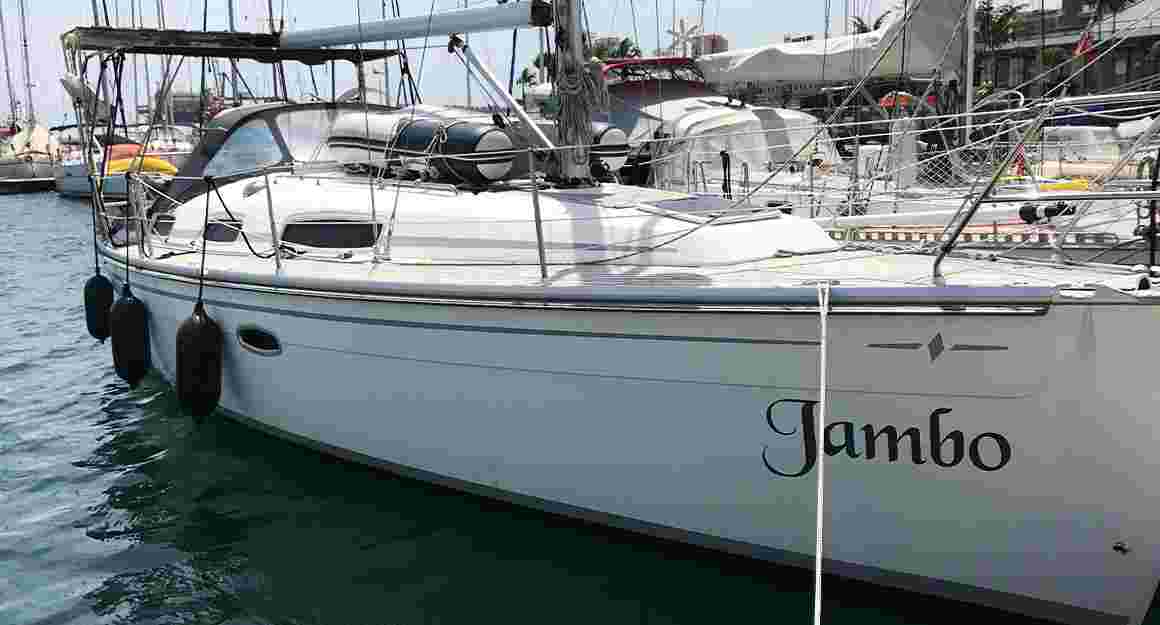 The Jambo was equipped with solar panels for its long voyages, for example.

„While I am a sociable person, I do also enjoy being alone at sea on these long passages. The basic prerequisite is, of course, that you are able to manage your ship alone, to carry out the daily chores and to cope with the loneliness. Interval sleeping, also called polyphasic sleeping, is not successful for everyone. It’s just that I always find it a bit difficult during the first few days at sea, until I find my rhythm. Basically I get on well with it. I enjoy almost every day at sea and am happy about the special moments, at sunrise and sunset or when I spot whales or dolphins. Navigation is often very exciting, too.“

„I don’t really have any worries and enjoy my single‐handed ocean passages without constantly reminding myself of what could happen. Nevertheless, I am aware of the risks, they are taken seriously and given the necessary consideration. On my first Atlantic crossing, I fell ill on the second day. A viral infection that Anke contracted in the days before my departure on Lanzarote caught me on the Atlantic with a time delay. I managed to get it under control with cold remedies and was fit again after five days. So a good first‐aid kit is important. But it can also be the case that you don’t get it under control and then have to make a quick port call. That’s why I regularly consider my options for such an eventuality.“ 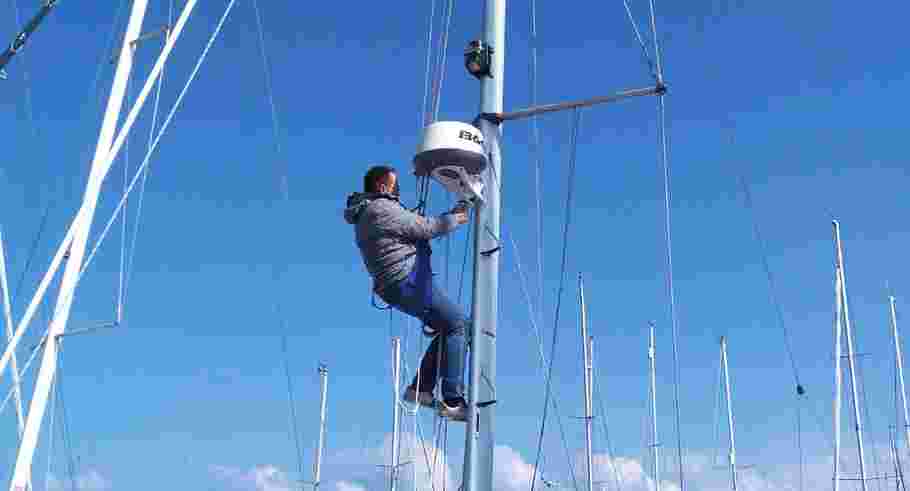 Small repairs are done by the skipper himself. 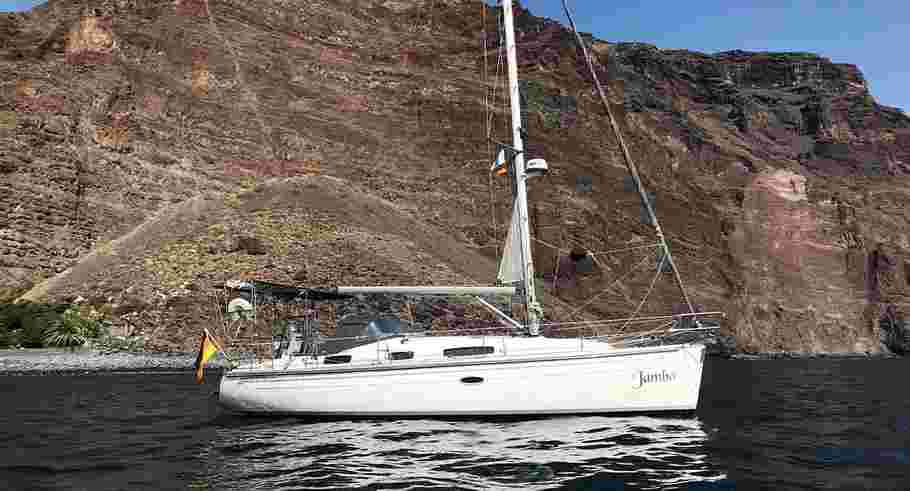 Enjoying the quiet moments at sea.

„Another risk is that the technology could fail or something could break. Even then, you might have to stop at the next port. Of course, the fear of going overboard is ever present. For the single‐handed sailor, it would mean the end. I have divided the Jambo into two areas on deck, a green and a red one. My cockpit is the green area. The gear rack and the bimini construction form a sort of safety cage that protects me well from going overboard. This is my green area, where I mainly stay. The rest of the deck is the red area, where I only move around very cautiously and clipped on with a harness. I spend as little time there as possible. Although I am aware of the risks, I sail across the Atlantic quite carefree and can enjoy it.“

Is the BAVARIA 34 Holiday the perfect allround boat? „I think everyone has to decide that for themselves individually. Because it also depends a lot on what the individual expects and desires. For me, the most important aspects are safety and feeling comfortable on board. The Jambo is definitely seaworthy. She holds category‐A status and is therefore seaworthy, which means that she will right herself after capsizing. Unfortunately, that happened to us twice in heavy seas in the English Channel. Jambo was tossed on her side by a high and steep wave heeling at about 70 degrees. But she was up again quickly. We were involuntarily testing the righting behaviour at the time. The Jambo is my home for several months on a long voyage and I feel very comfortable on board because I have equipped her for my needs. Meanwhile, what I am still lacking, I am currently retrofitting. However, this does not suit everyone, as people have different ideas and needs. There is no one single ideal boat for everyone.“

More about the Jambo and their crew at www.mjambo.de and on YouTube: M Jambo. 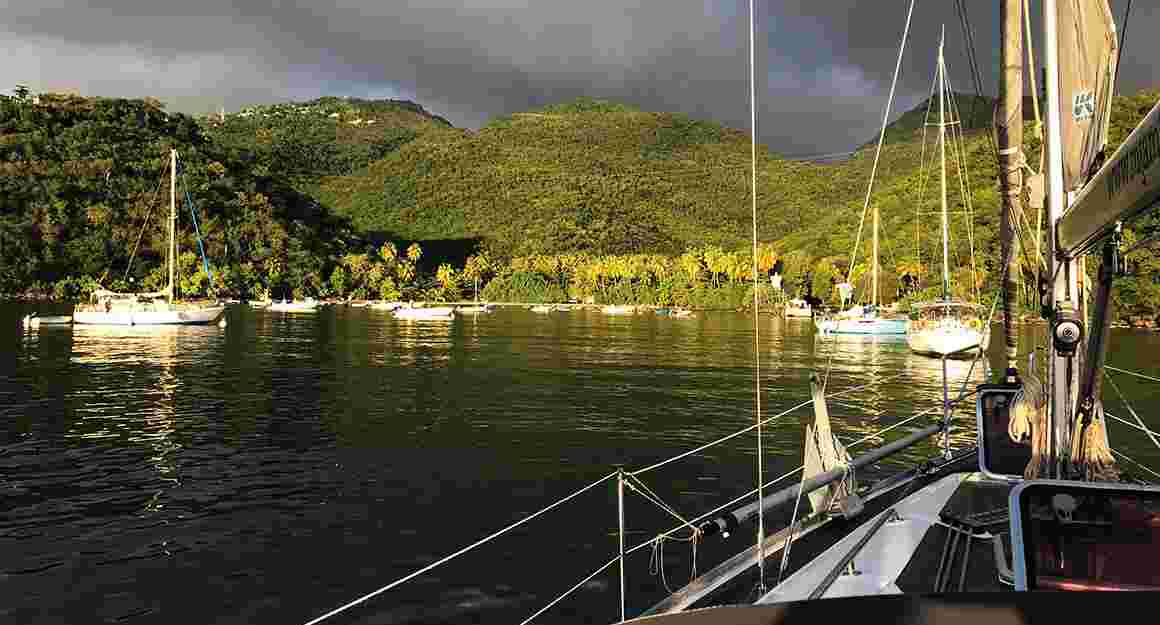 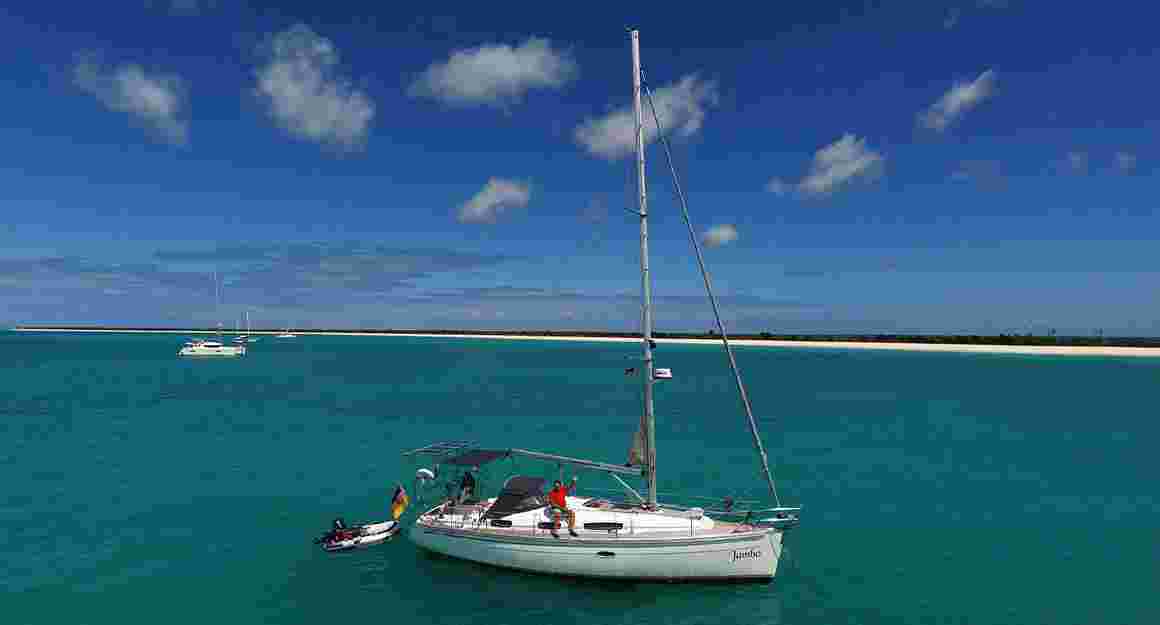 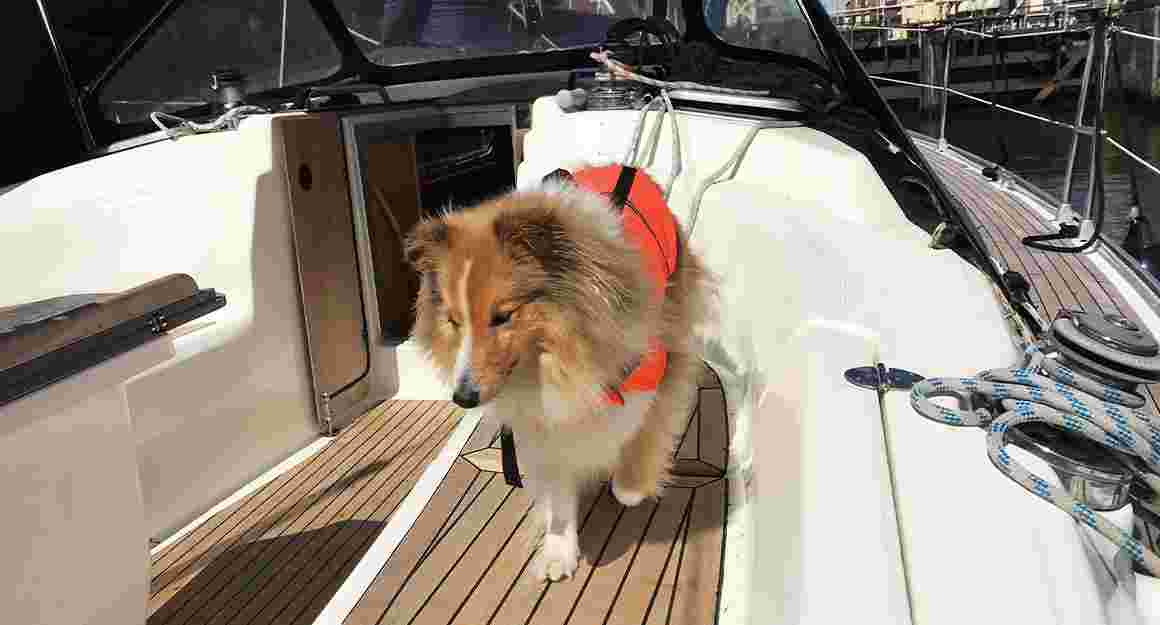 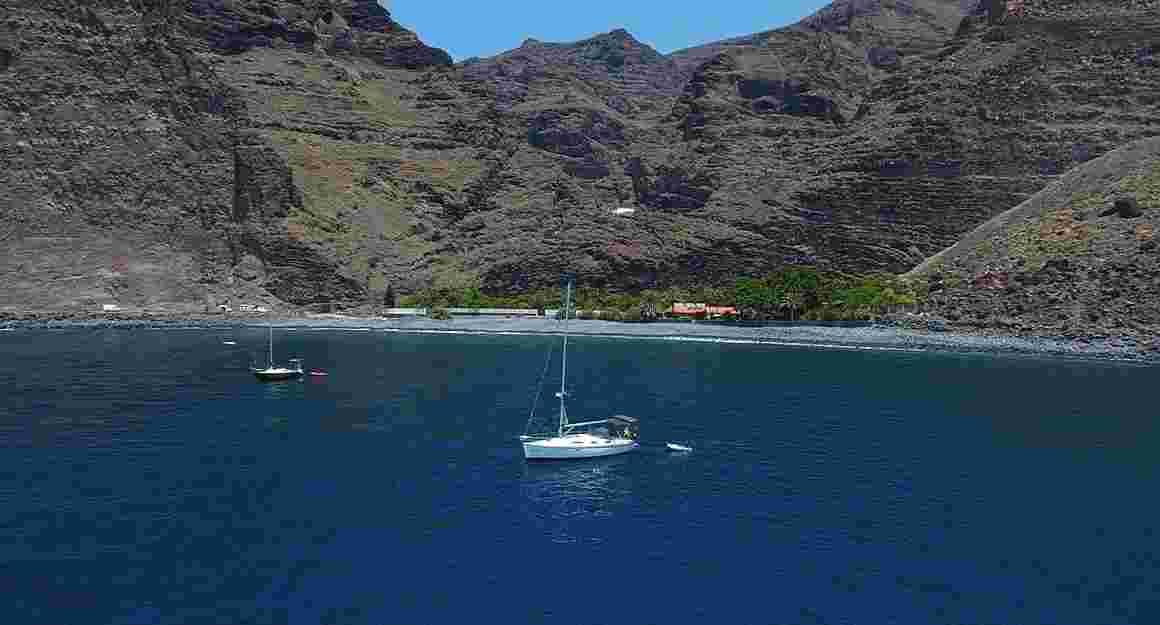 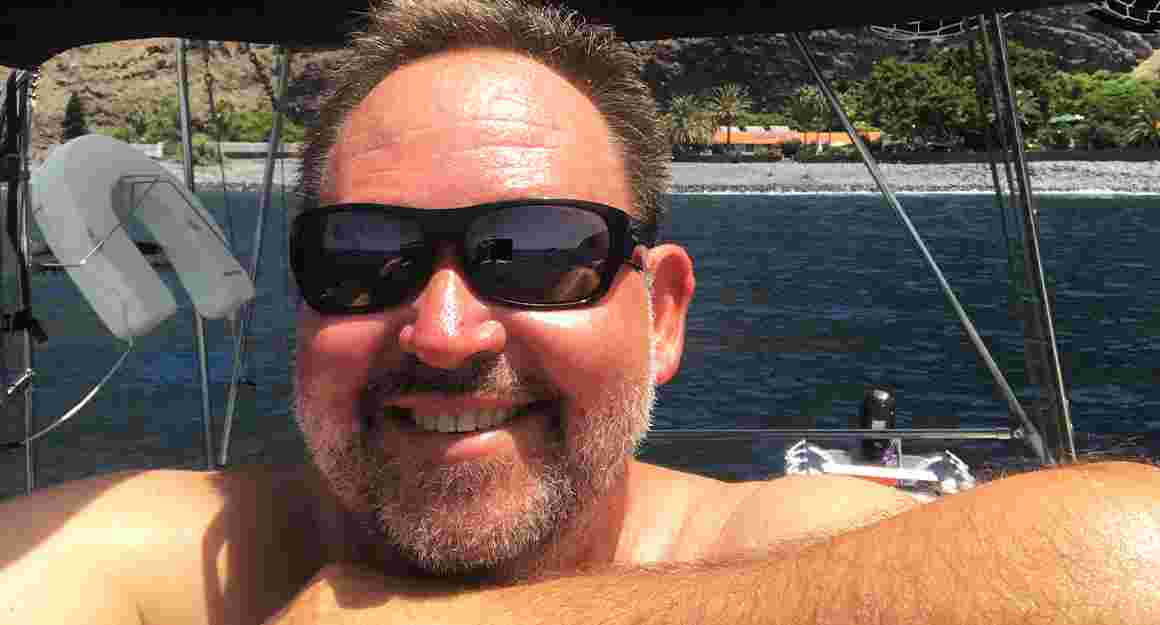 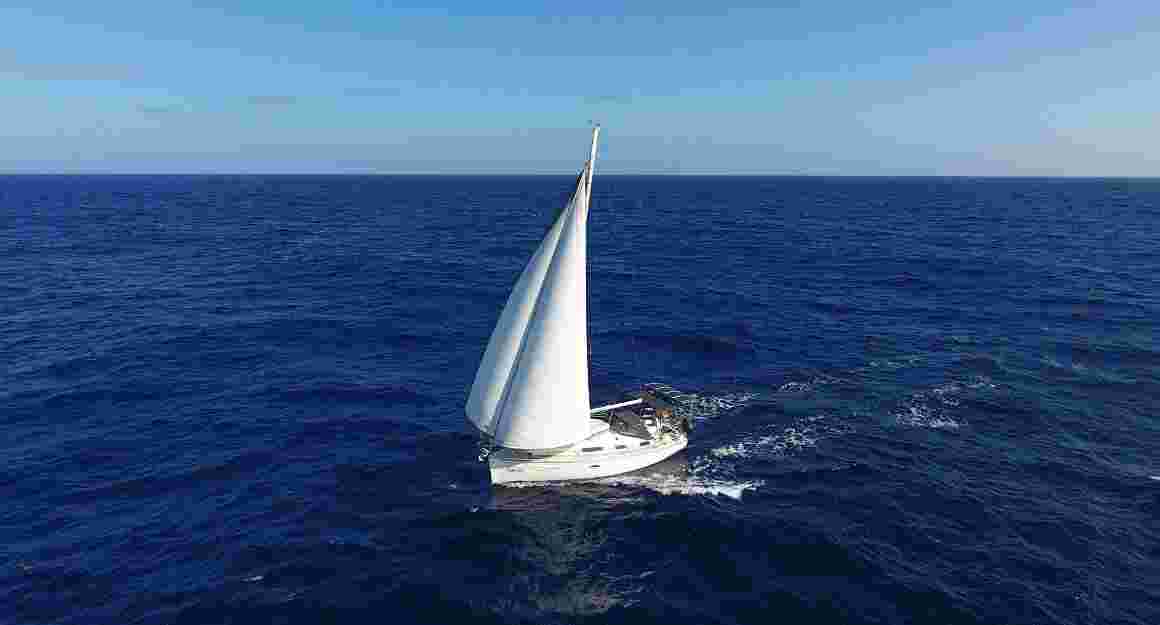 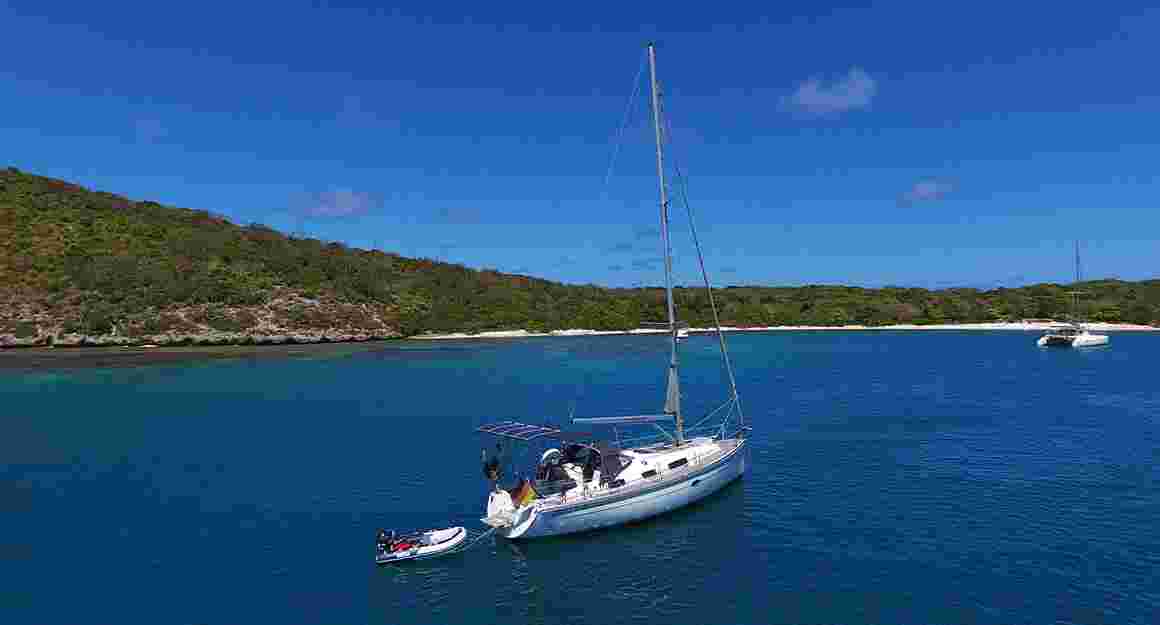 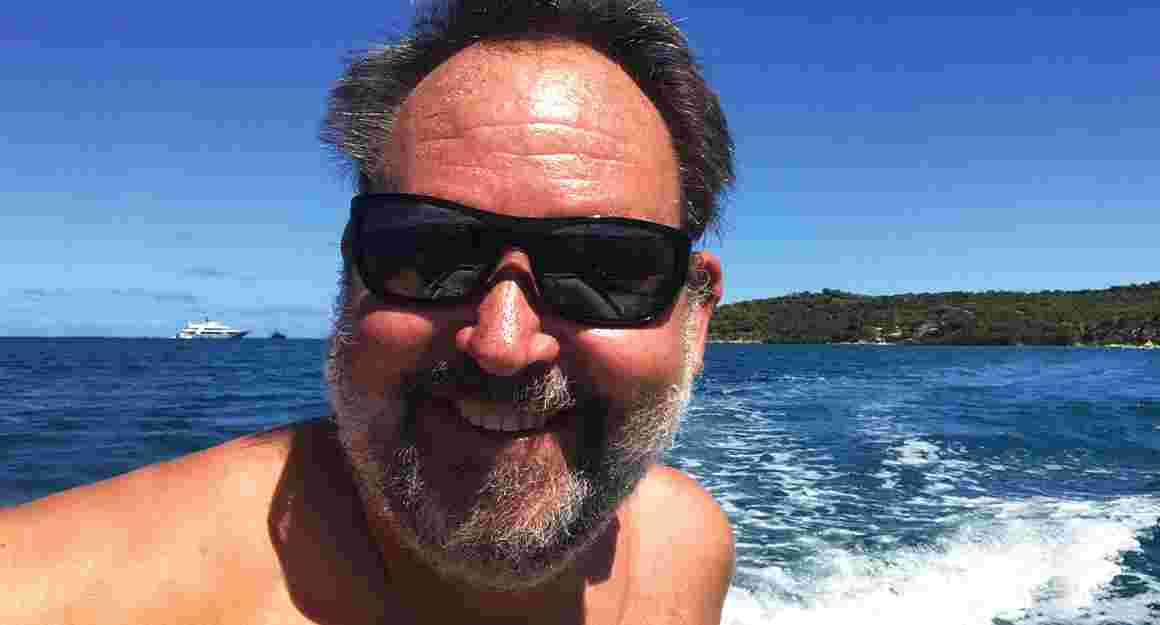 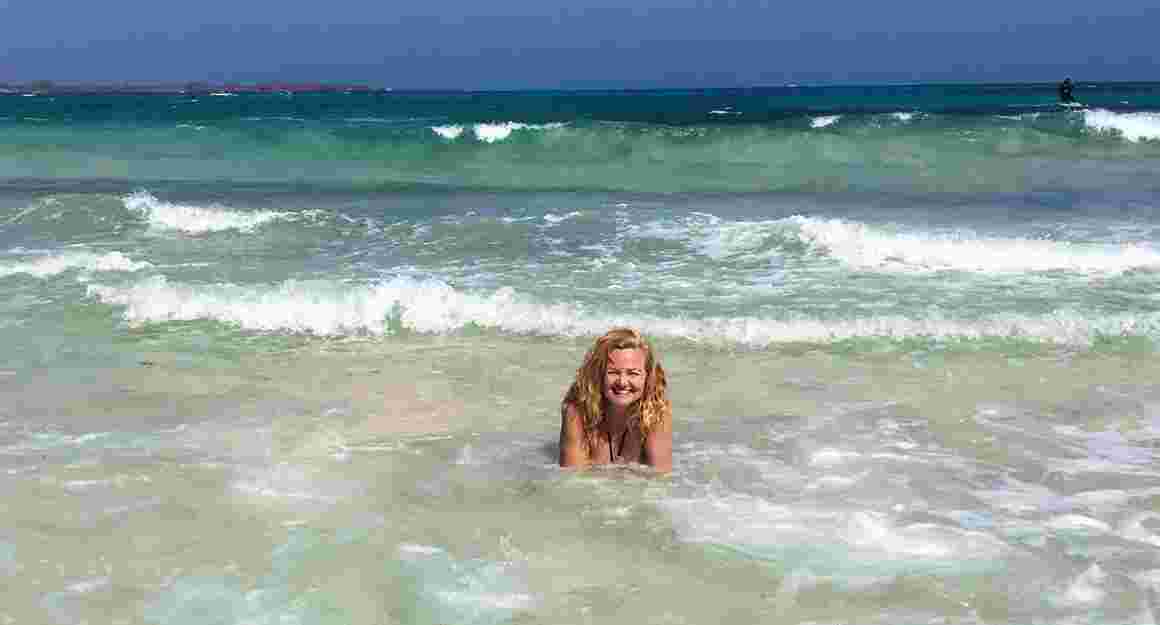