The overland journeys that a BAVARIA covers from the yard in Giebelstadt, via one of the more than 77 BAVARIA YACHTS dealers worldwide, to the customer are sometimes even more spectacular than any voyage. This was the situation for a BAVARIA R55, the largest motor yacht from BAVARIA YACHTS, on her journey from Marina Saal located near the Danube to its mooring at the French Mediterranean coast at the end of March.

The dimensions of a BAVARIA R55 are already striking on the water. Including the bathing platform, the flagship of the BAVARIA YACHTS motor boat fleet is almost 18 metres long. With a width of 4.75 metres and a height of more than 6.50 metres from the keel to the radar on the flybridge, the BAVARIA R55 forms an impressive image in the marina. Transporting the R55 on German motorways with their bridges, through tunnels and on narrow cross‐country roads in France is a real challenge for any haulier. 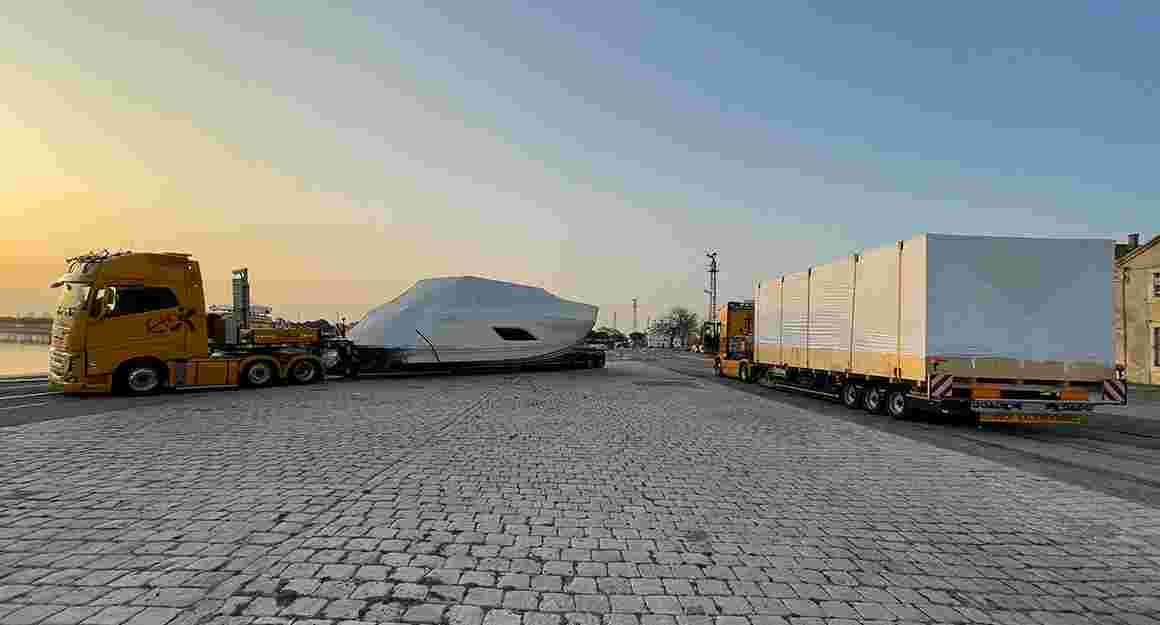 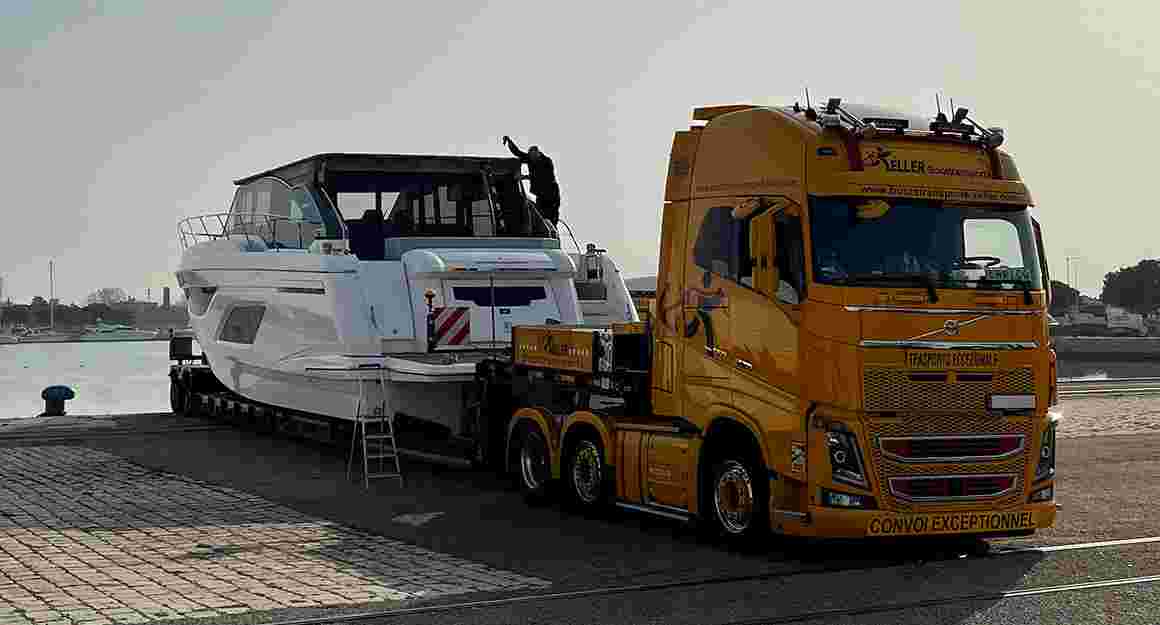 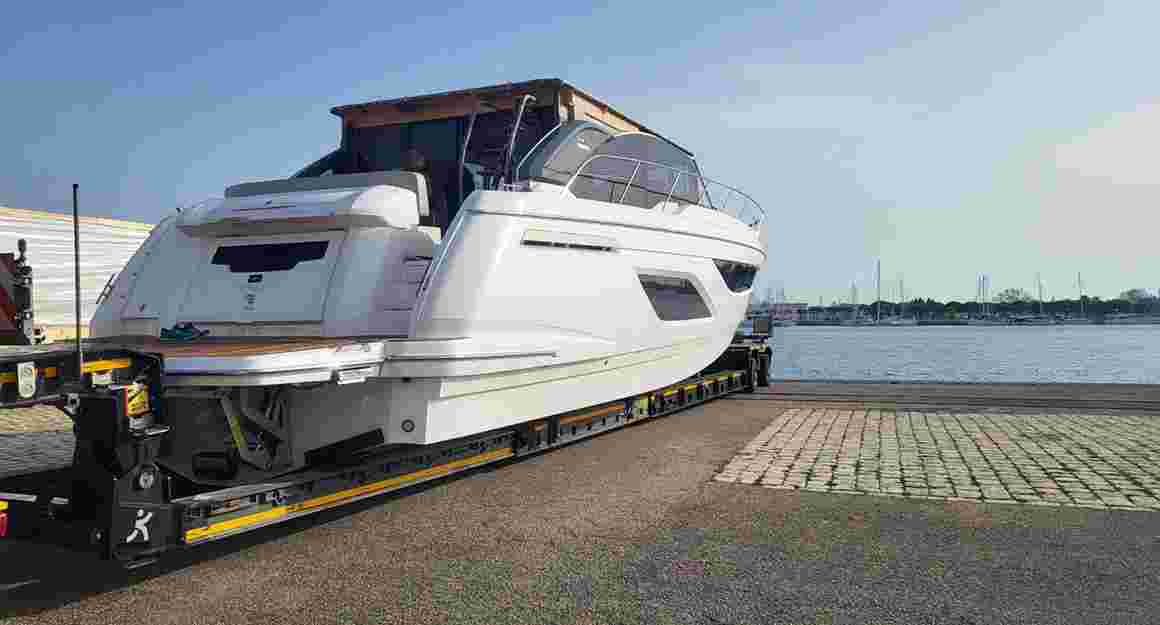 At the end of March, a brand‐new BAVARIA R55 made the more than 1200‐kilometre overland journey directly from the showroom at Boote Yachten Marina Saal to Port Napoleon between Montpellier and Toulon. More precisely, two heavy loads took to the road because it was necessary to remove the flybridge to clear the bridges. The semitrailer for one of the two trucks was already fully laden with the flybridge, well packed in a crate. The R55 was lashed securely to the second semitrailer, after also removing the propulsion systems to reduce the clearance height for the bridges as much as possible.

"Just preparing the transport was nerve‐racking. Loading an 18‐metre yacht onto a truck and then securing it for transport is not a quick task. We spent weeks on perfect preparation‟,  reports Peter Seifert, General Manager of Boote Yachten Marina Saal GmbH. 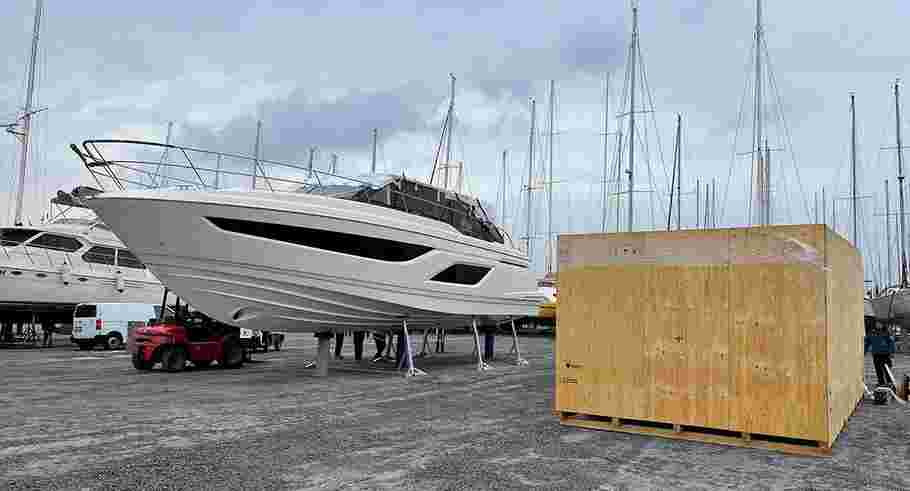 Too high for transport over motorways and country roads... 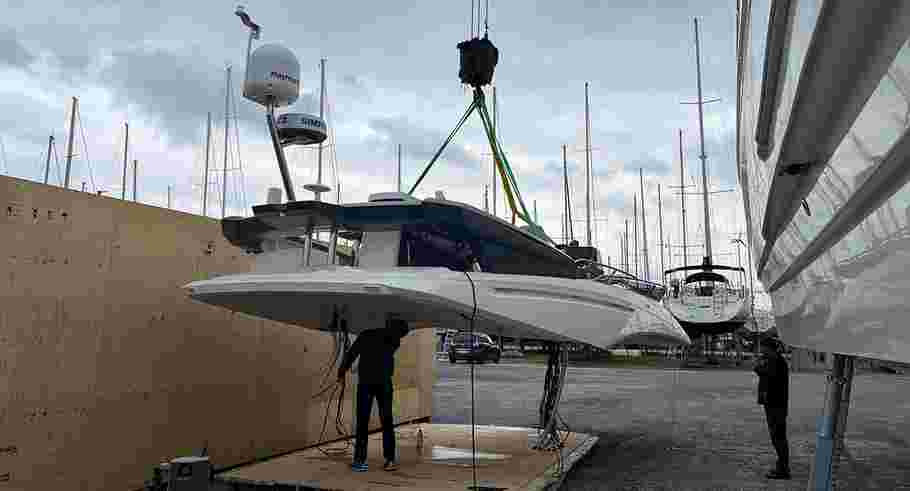 that's why the flybridge had to be transported in its own box.

On March 22, the two trucks and their semitrailers with the R55 could then set off for France. Overnight it went over the German motorways, constantly secured by escort vehicles and the police. In France, the transport was stopped and checked time and again and also got accompanied on narrow cross‐country roads. It often passed close to buildings, over junctions and up and down difficult gradients. The transport team had to drive every kilometre with maximum concentration.

"As the R55 arrived undamaged in Port Napoleon four days later and we were able to start unloading without delay, we were obviously over the moon. We had a tight schedule because the new owner wanted to drive the R55 to her final mooring in Nice a few days later and a strong Mistral with wind speeds of over 90 km/h was forecast‟, explains Christian Wagner, Head of Sales at Boote Yachten Marina Saal GmbH. 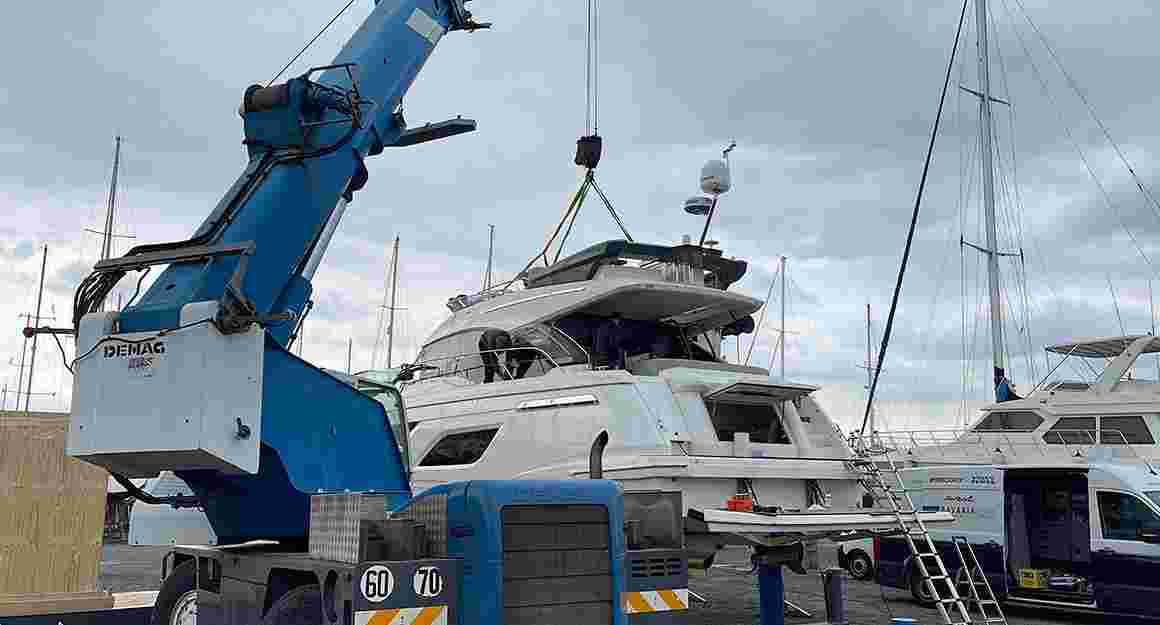 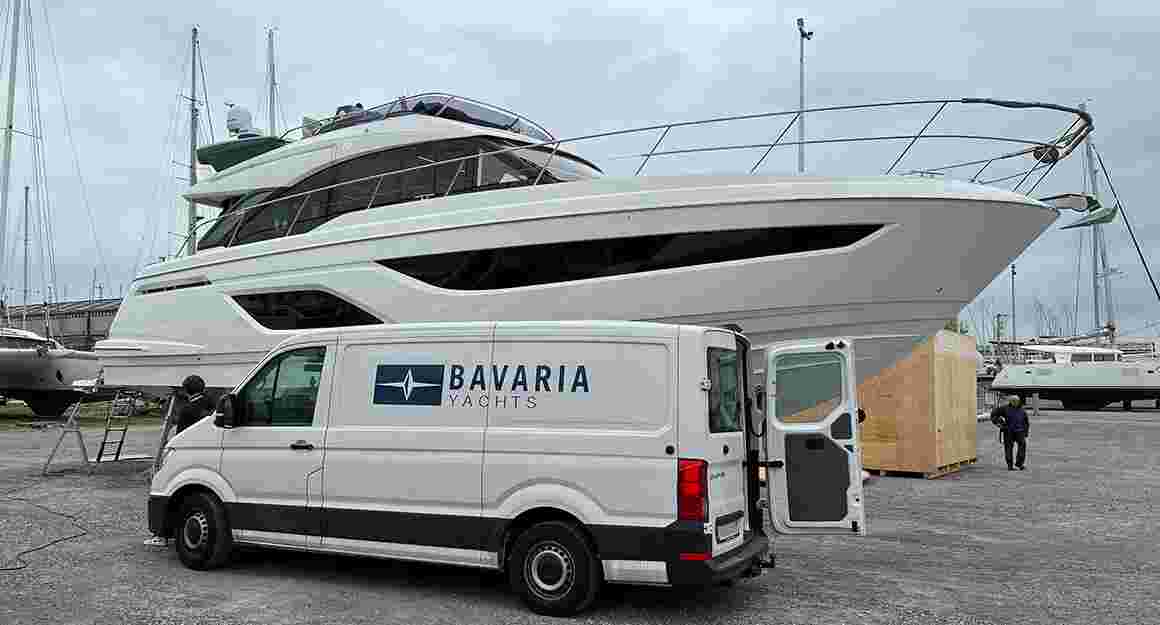 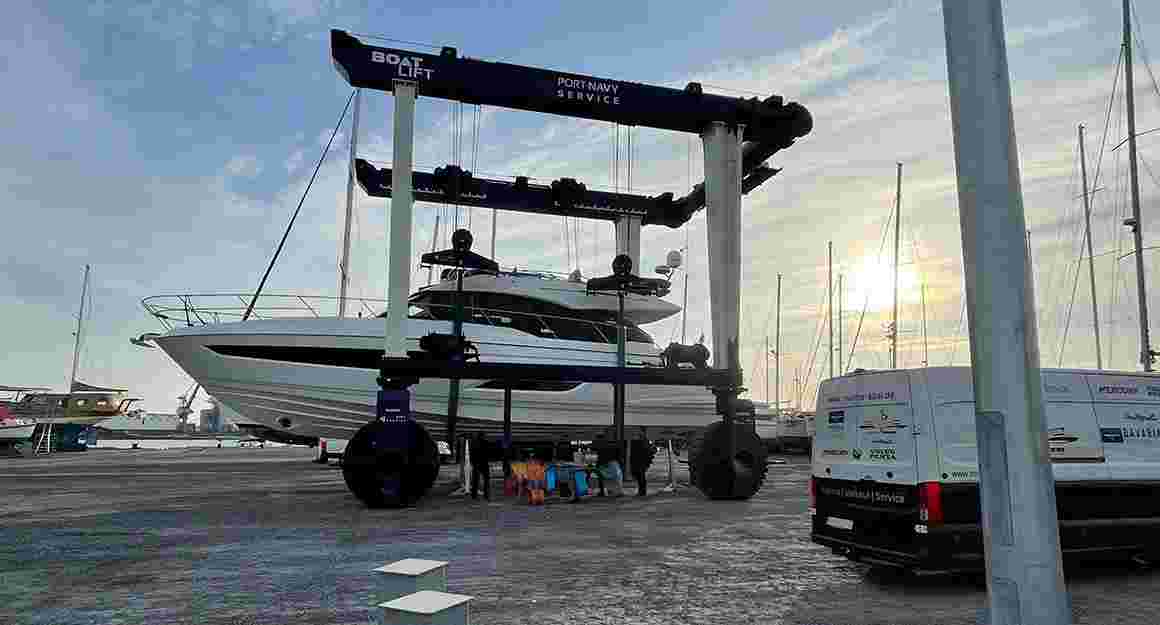 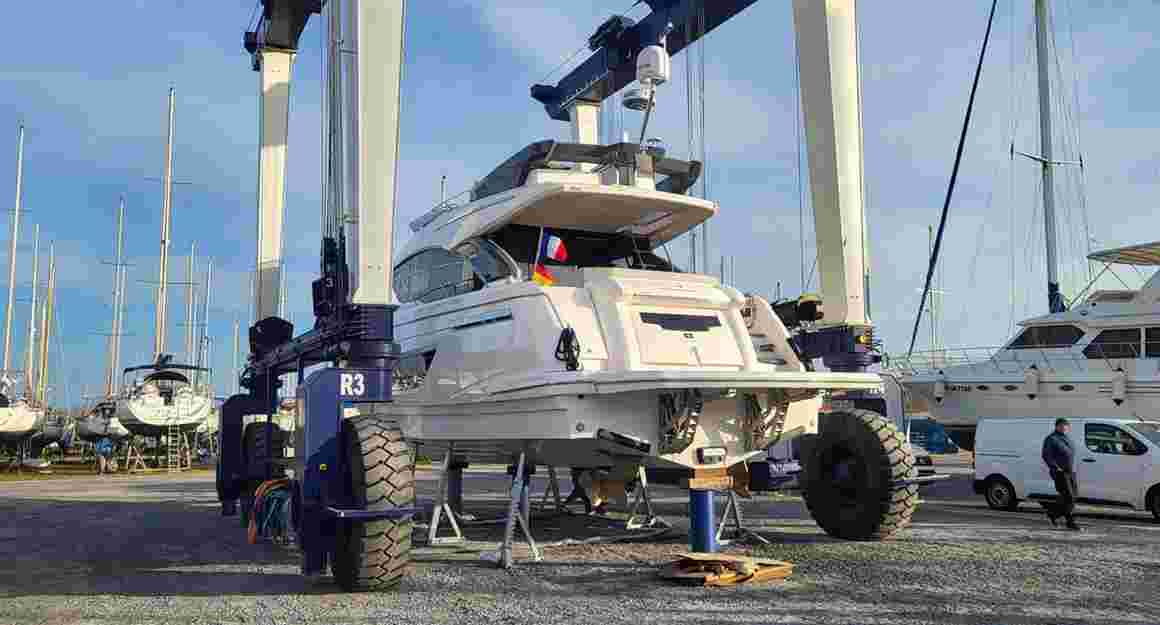 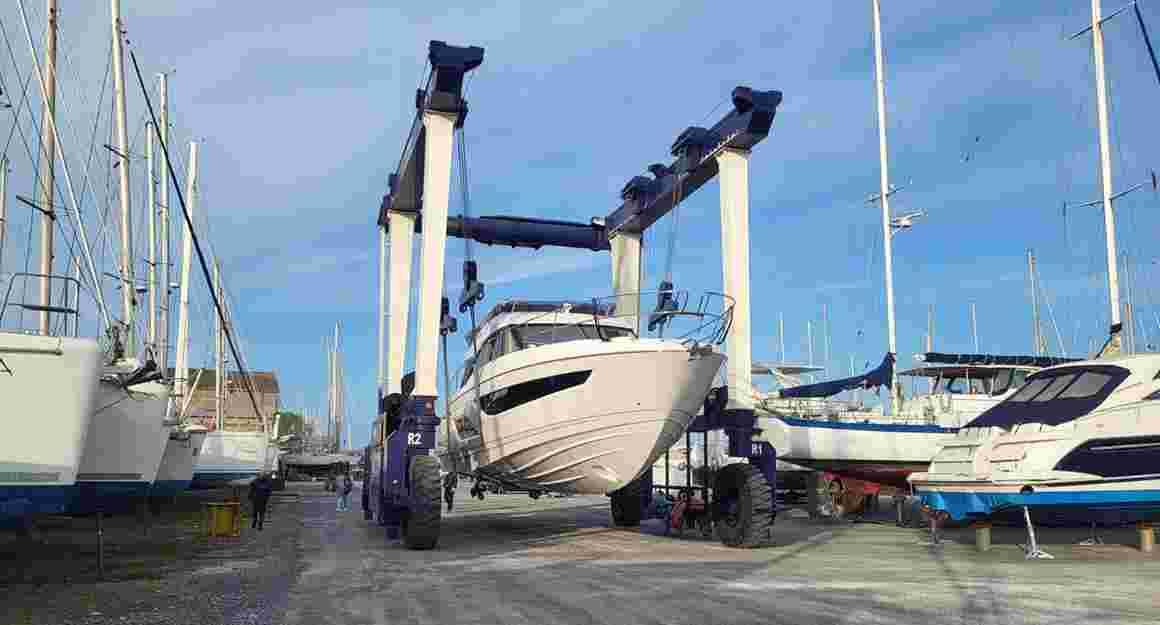 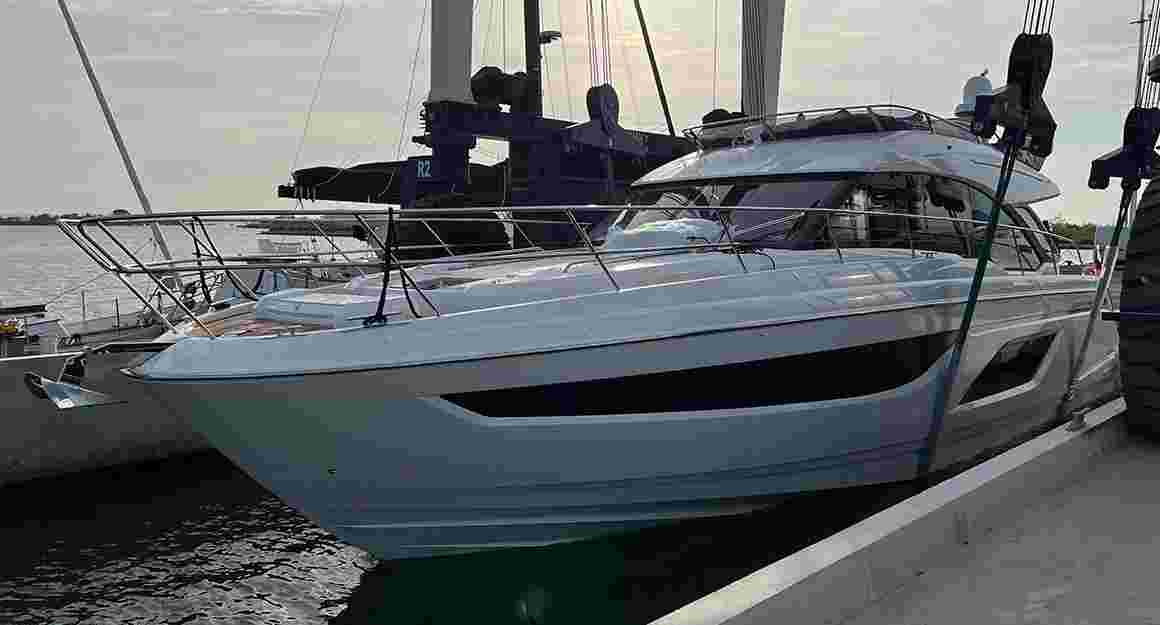 The BAVARIA boat specialists Slavo Korejwo and Stefan Emrich travelled directly from the BAVARIA YACHTS yard to the Côte d’Azur to provide assistance. The two experts, who undertake such tricky tasks for BAVARIA YACHTS worldwide, are familiar with every corner of the BAVARIA R55 and have often mounted a flybridge on a BAVARIA R55. At the same time, it was also necessary to mount the two propulsion systems again and prepare the R55 for final acceptance. Work went on around the clock until finally the big moment arrived and the owner of the new BAVARIA R55 was able to take possession for the transfer to Nice.

"Undertaking a sea trial together with the owner is always the best moment and is a reward for the stressful days of preparation for delivery. Our team in Saal, all those involved in the transport, our colleagues at BAVARIA YACHTS and the assembly team on site did a really good job‟, resumes Peter Seifert at the end of the journey of the BAVARIA R55 from the Danube to the Mediterranean. 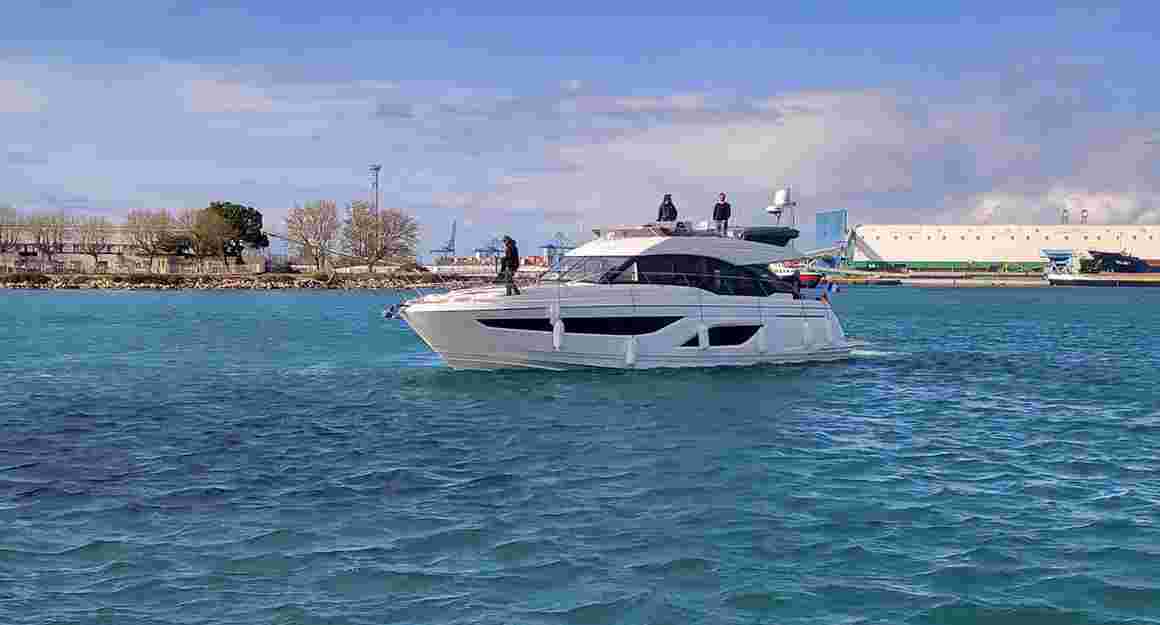 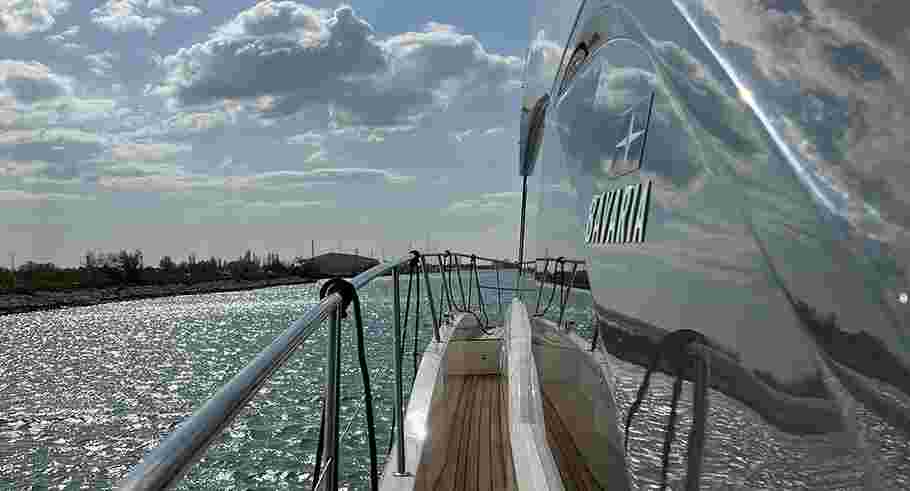 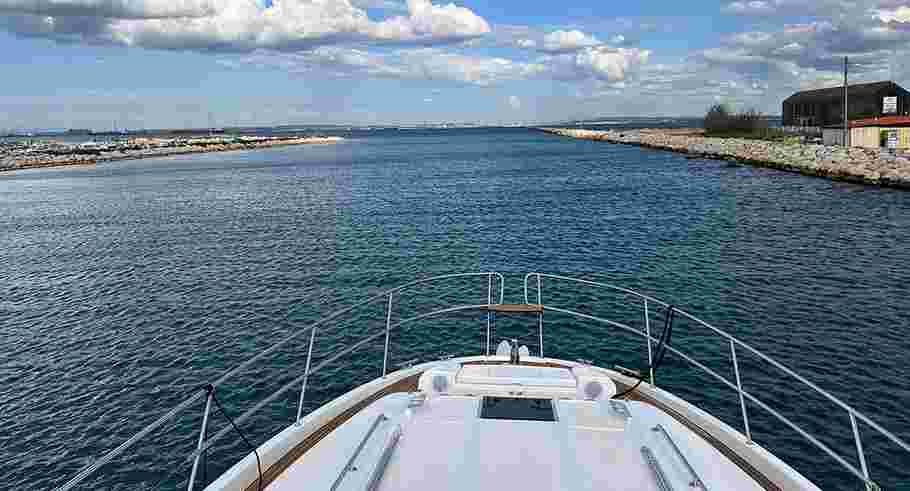 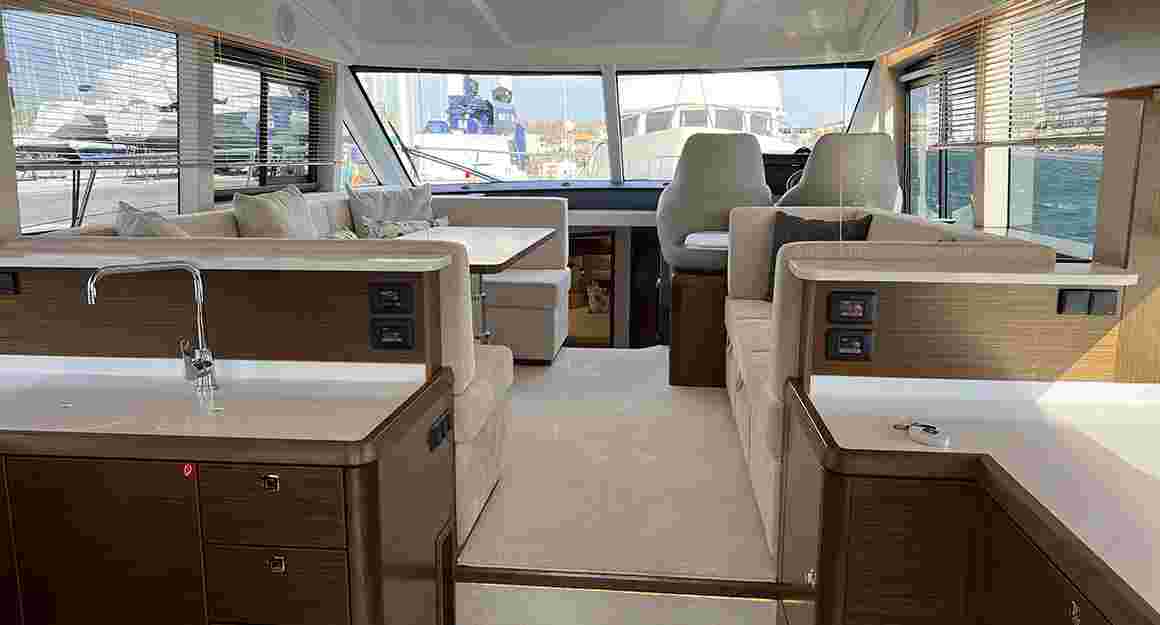 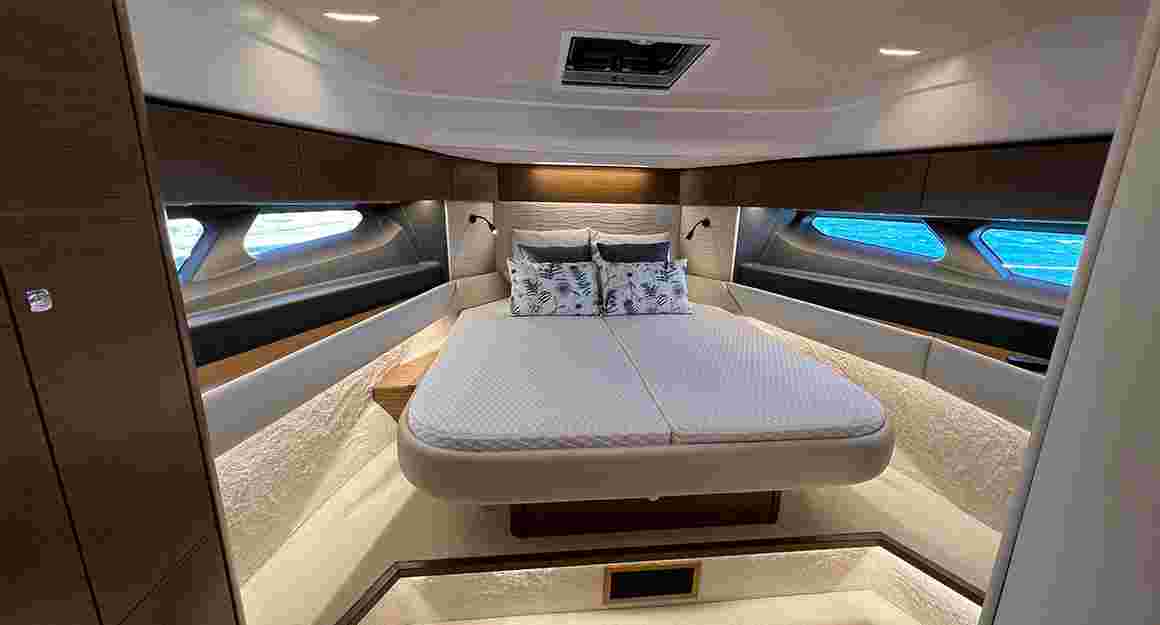 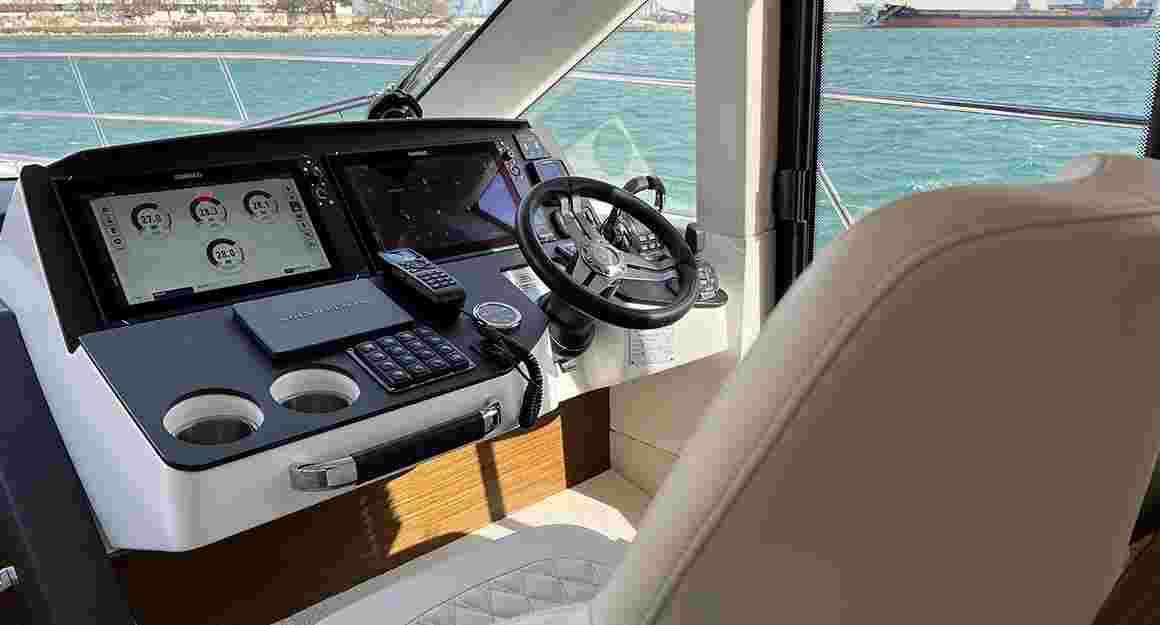 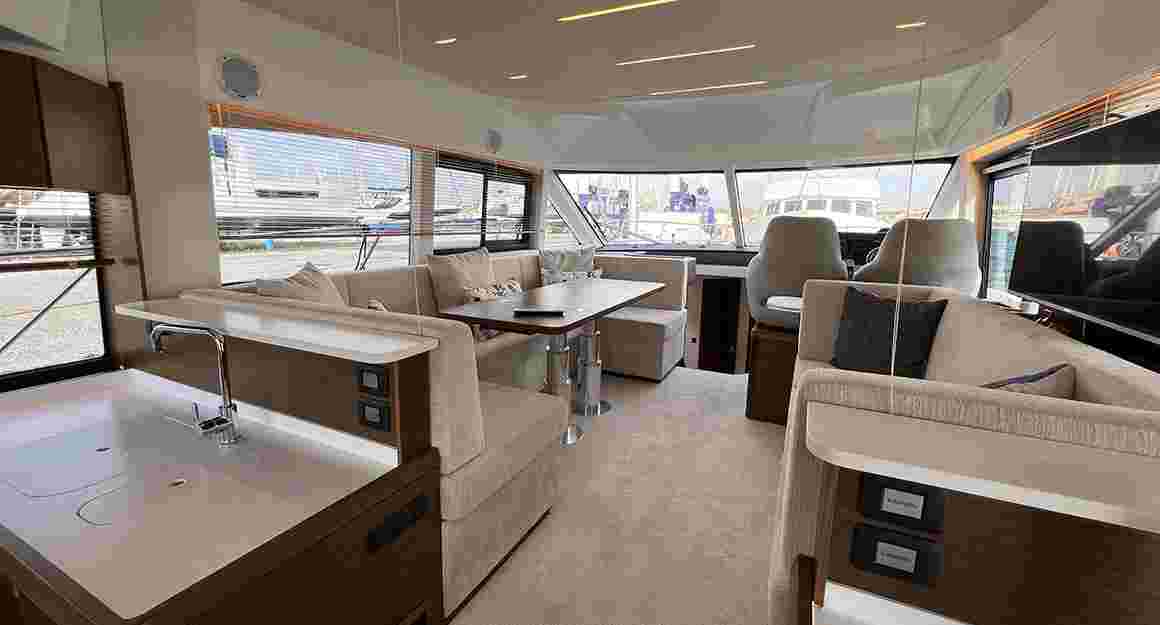 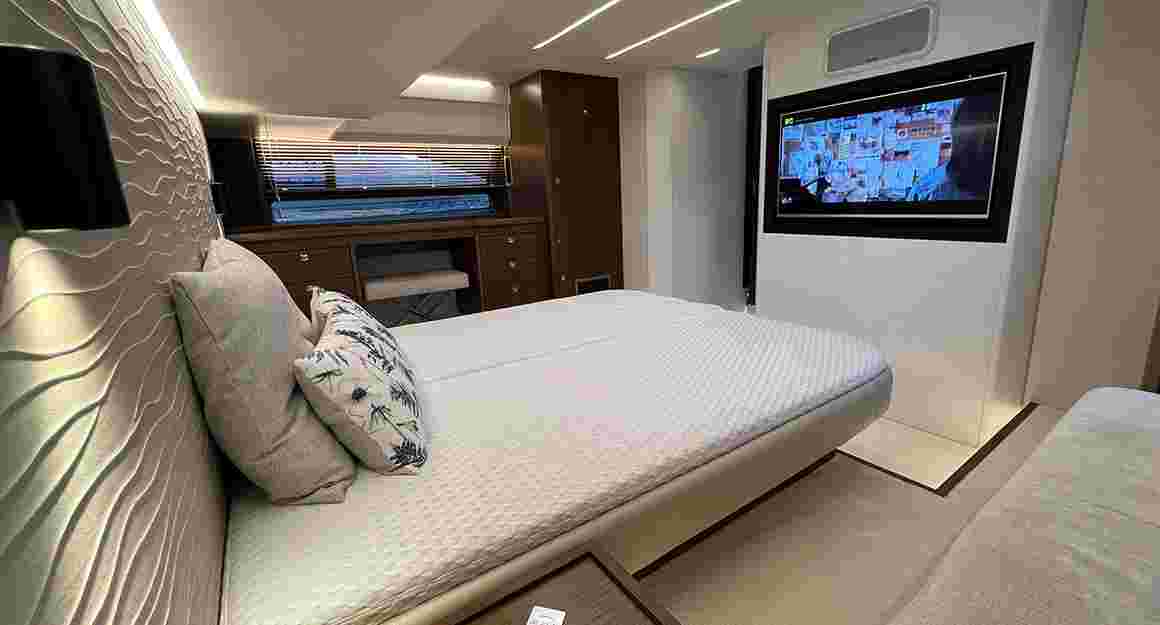 A look behind the scenes: 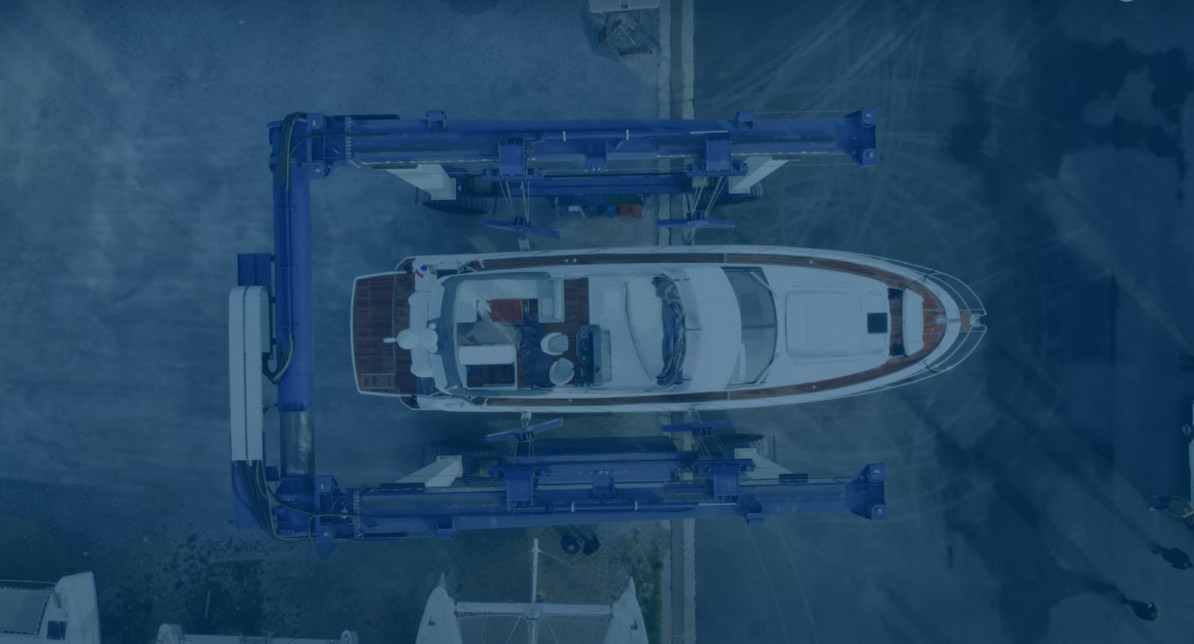 Check out the BAVARIA R55
From the Danube to…

The cruiser that races: How fast is the new sailing yacht BAVARIA C38?
Preparing for the summer season
No fear of the authorities in foreign ports