The lamination of a yacht: layer by layer

The „birth“ of a new BAVARIA begins with the lamination of the hull and deck. But how exactly are these important parts laminated?

We had it explained to us by Christopher Marschka, the head of the laminating and pre‐assembly department. He employs about 80 people, many of whom have been with the company for a very long time and are therefore highly experienced. We are about to find out just how important that is. 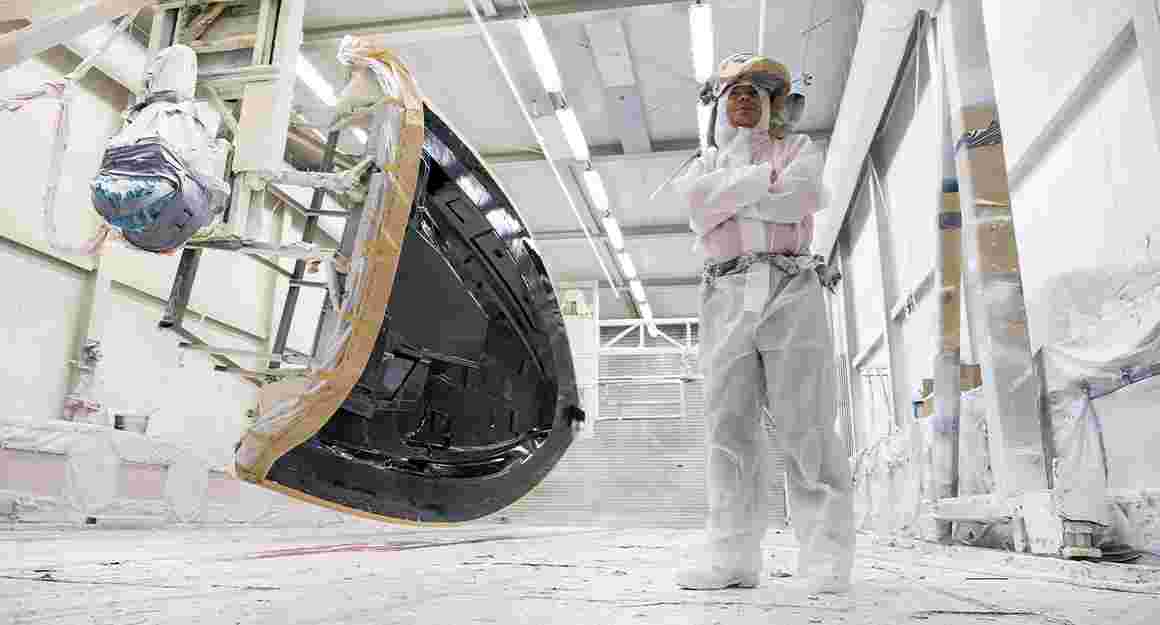 Ready for the first layer. For the decks, the gelcoat is put into the mould manually.

There are three large parts in total – the hull in one piece and the deck in two. One is the actual deck and the other is an inner part, called the „sky“ in production. When laminating in the mould, we work from the outside to the inside. First the gelcoat is applied, that is, the shiny, hard surface of the hull. In the hull itself, this can be done by a modern, CNC‐controlled robot. Because here, especially with the sailboats, we are presented with large, smooth surfaces without difficult corners or edges. The robot goes through the hull three times with the gelcoat sprayer, making for a layer of 0.8 millimetres in thickness. At this point, the coloured stripes are already applied in the waterline and on the hull. This layer then has to dry for 1.5 hours.

Then comes one of the key steps in laminating: The application of the first layer of glass fibre mats. This, explains Christopher Marschka, is one of the decisive factors for the ultimate quality of a yacht. Because this forms the important barrier against moisture penetration, there must be no defects or air pockets here. From this point incidentally, the work is done exclusively by hand, and this first layer, says Marschka, is not only processed with a special resin, but also only laminated by seasoned professionals: „These are employees who in some cases have been with us for 15 years or more.“ 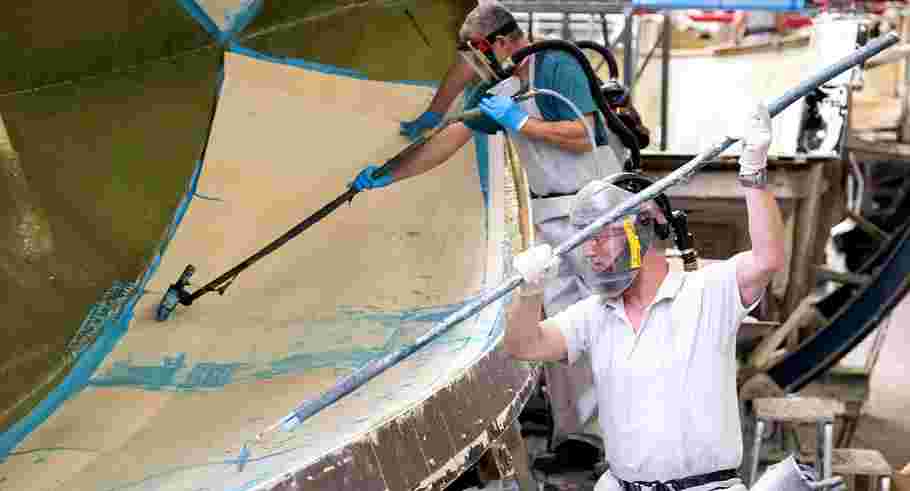 Laminating by hand according to plan. 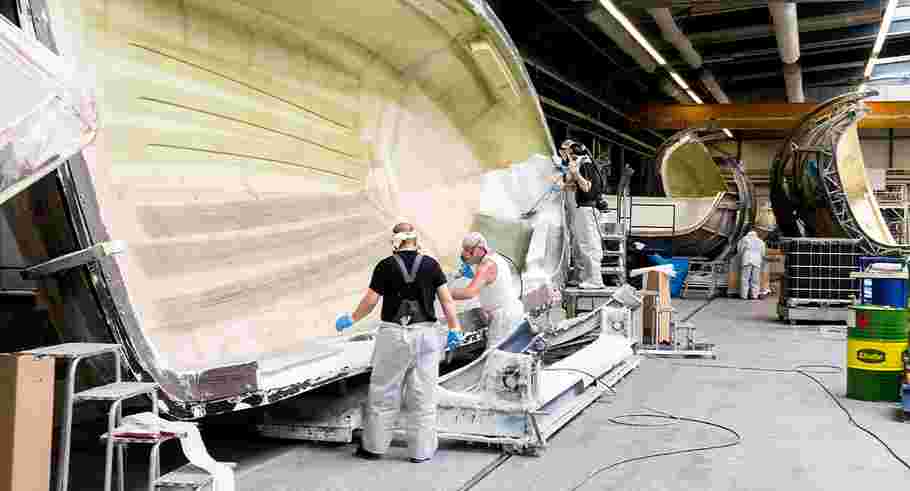 Thereafter, further layers of glass fibre mats are laminated by hand with polyester resin. Likewise, a PVC foam core for the sandwich laminate is glued on and laminated in. This is all done strictly according to the laminate plan, which specifies the entire structure, right down to the overlaps of the individual mats. Intermediate drying times are bridged by switching the laminating team from boat to boat. The moulds are also rotatably mounted, such that even within a mould, laminating alternates first on one side and then the other.

After about two days, this pure laminating phase is completed. Now comes a particularly demanding task: setting up and gluing the base assembly. This, says division manager Marschka, is millimetric work. Because in the next step, the entire interior is built on this central reinforcement – and of course it has to fit.

Before the laminated hull is removed from the mould, it is placed into the annealing chamber for a few hours at around 50 degrees to harden. First the demoulding takes place. The rudder bearings are now pressed and glued into the hull from below, then it goes on a trolley into a gigantic milling machine where board passages, windows and other openings are cut out. This would make the hull ready for pre‐assembly: seacocks, trim tabs, bow thrusters, and in the case of sailing yachts, the engines are also installed here. In some places on the inside, the surface is already sealed here with topcoat: „It’s all about ensuring quality,“ says Christopher Marschka. And the hulls and decks are already checked at this point for any blemishes in the gelcoat finish. These are much easier and more effective to touch up here than later on the assembly line. 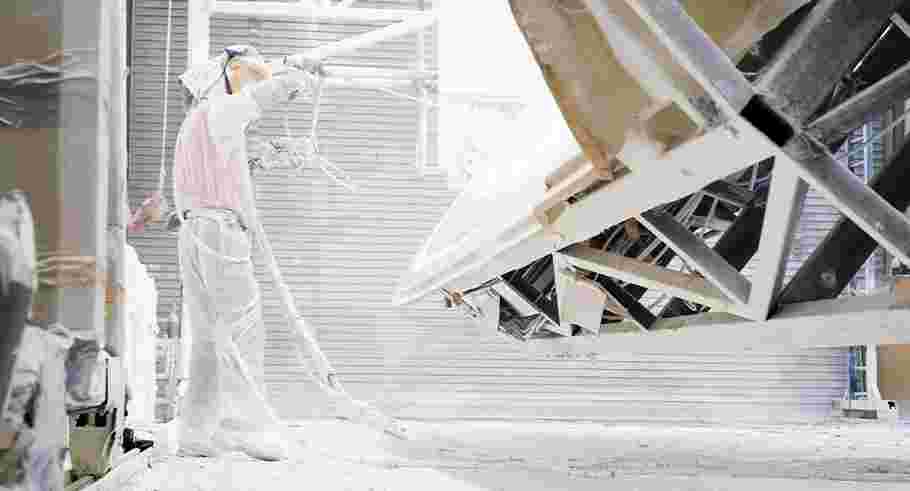 Each boat has its own mould. 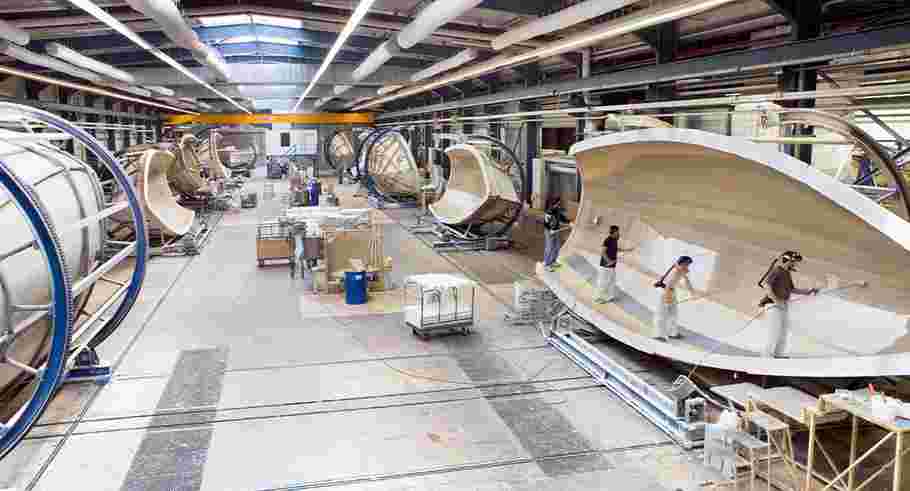 Hull production on the assembly line.

The lamination of the decks is a much more involved process because of the more complex shape. Even the gelcoat has to be applied by hand; a robot would fail because of the many tight radii, edges, shafts and coamings. Instead, trained specialists are used here who can cleanly apply the gelcoat even in the smallest corners in the large spray chamber. For later lamination, sharp corners in particular are filled round from the inside. This provides a radius so as to avoid air pockets. „There are many little things and crucial details to consider here that you simply have to know. It helps that we have colleagues with a lot of experience,“ Marschka explains.

Another important step that requires considerable precision is the gluing of deck and canopy. Here, too, we work with a tolerance of a few millimetres. In the next step, all the fittings are mounted on the decks: „We deliver two finished products to the assembly line, the hull and the deck. They continue to run in parallel there until they celebrate their marriage in assembly,“ Christopher Marschka explains in conclusion. 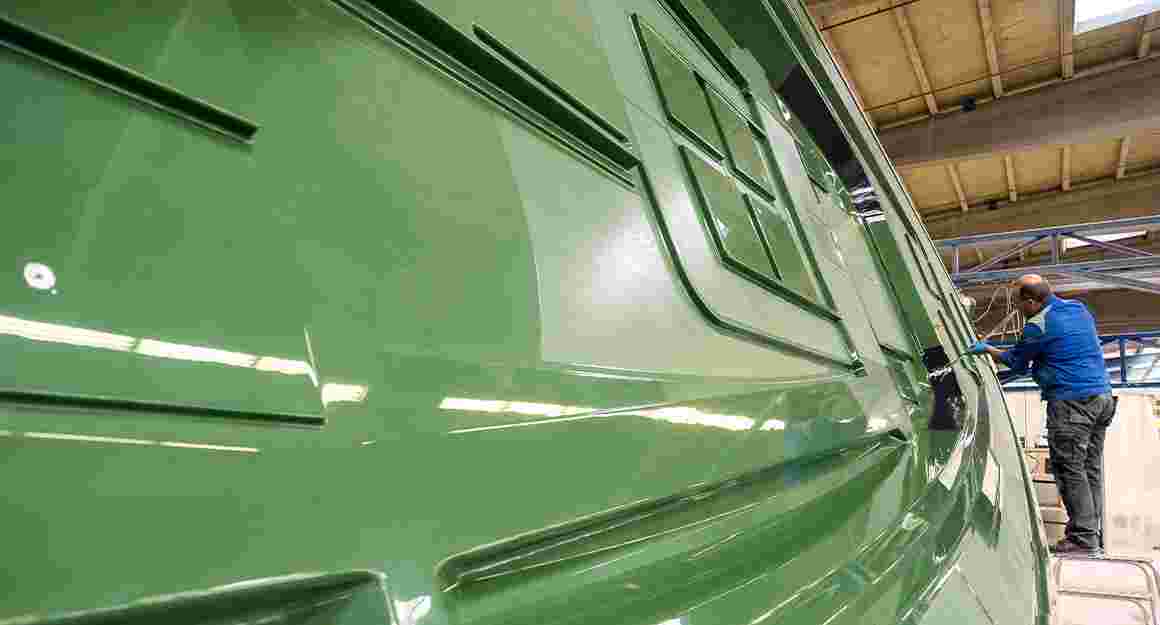 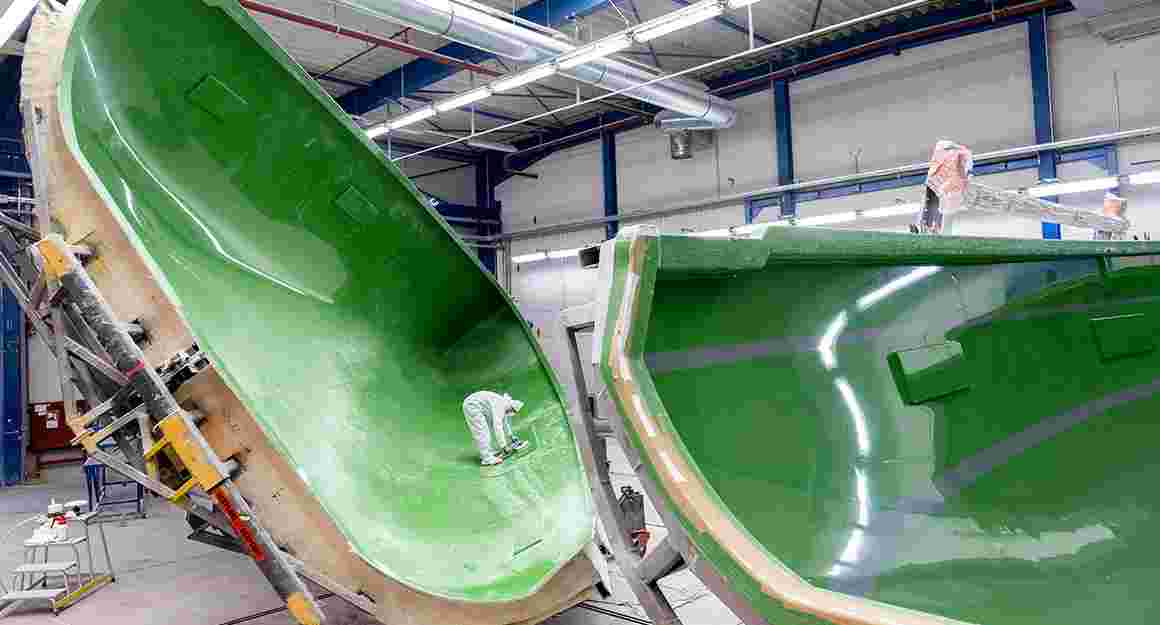 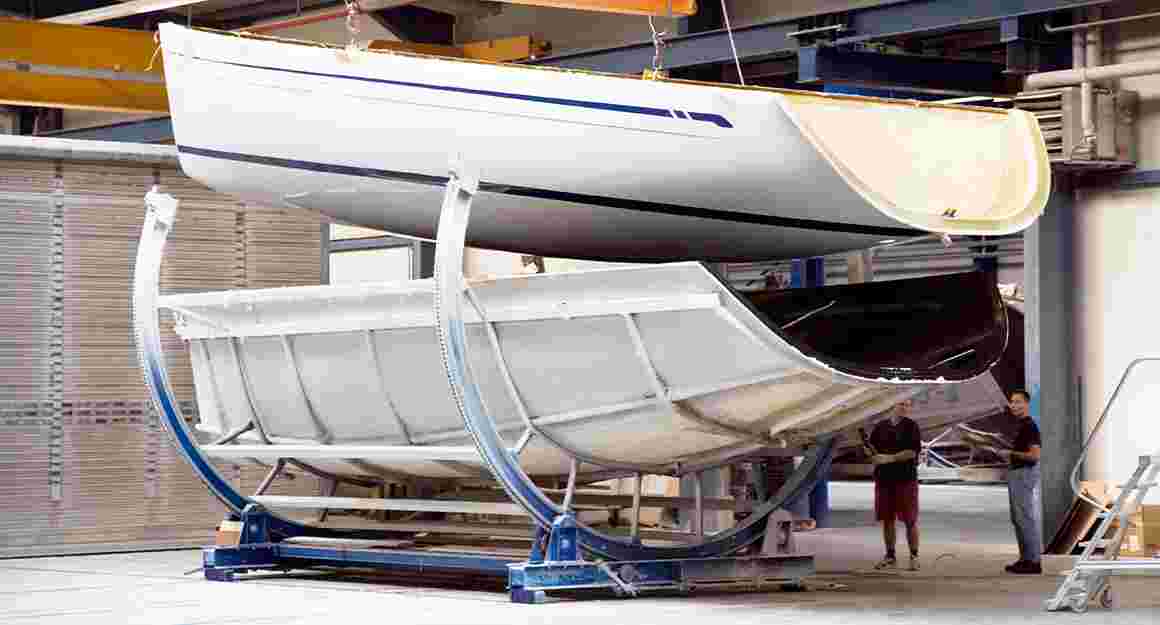 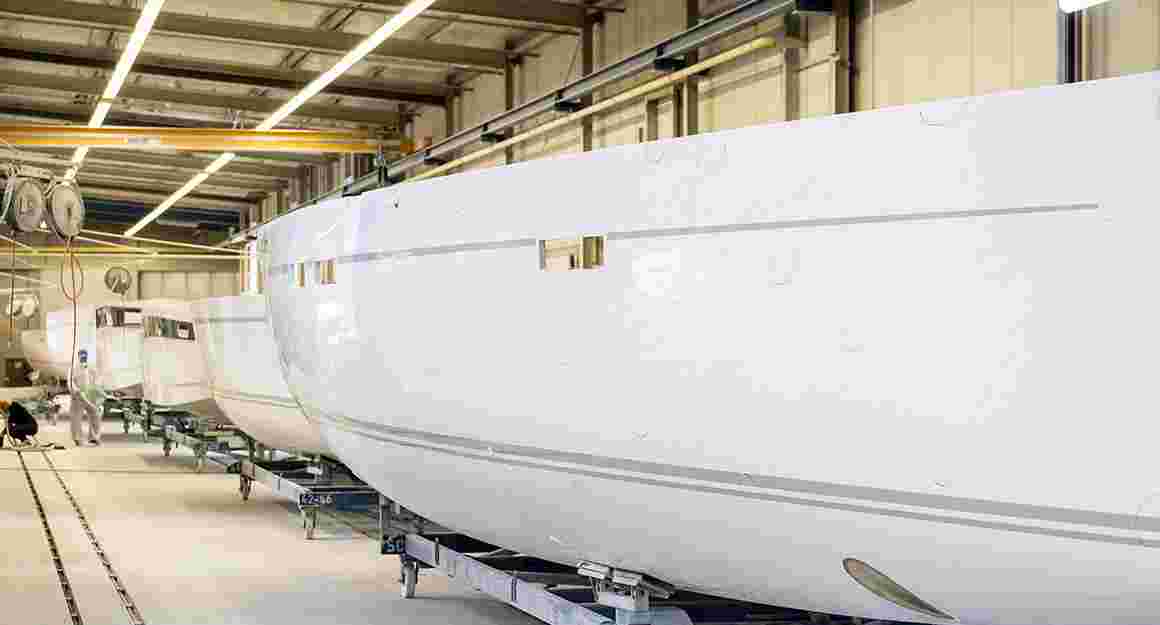 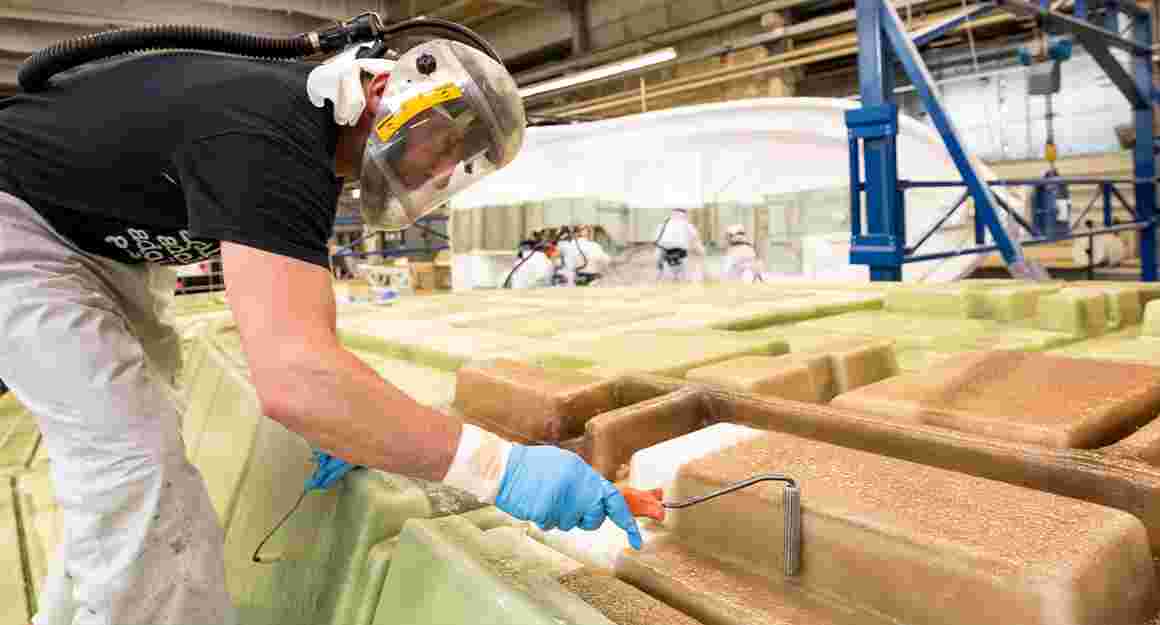 The lamination of a…